...  Snails are highly nutritious according to experts. They are rich in calcium, a mineral associated with healthy bones and teeth.

No one knows when the people of Liberia began eating snails. The nutritious mollusk found growing wild in forests and swamps, has been in the diet for as long as anyone could remember.

But before now few people have seen them as commercial farming businesses.  As climate change has made traditional farming more difficult and protecting Liberia’s forests more urgent there is a push across the country to find new reliable and sustainable sources of food. One of the most promising is snails.

Here in Nimba County, one company has grown snail farming into a thriving commercial enterprise. 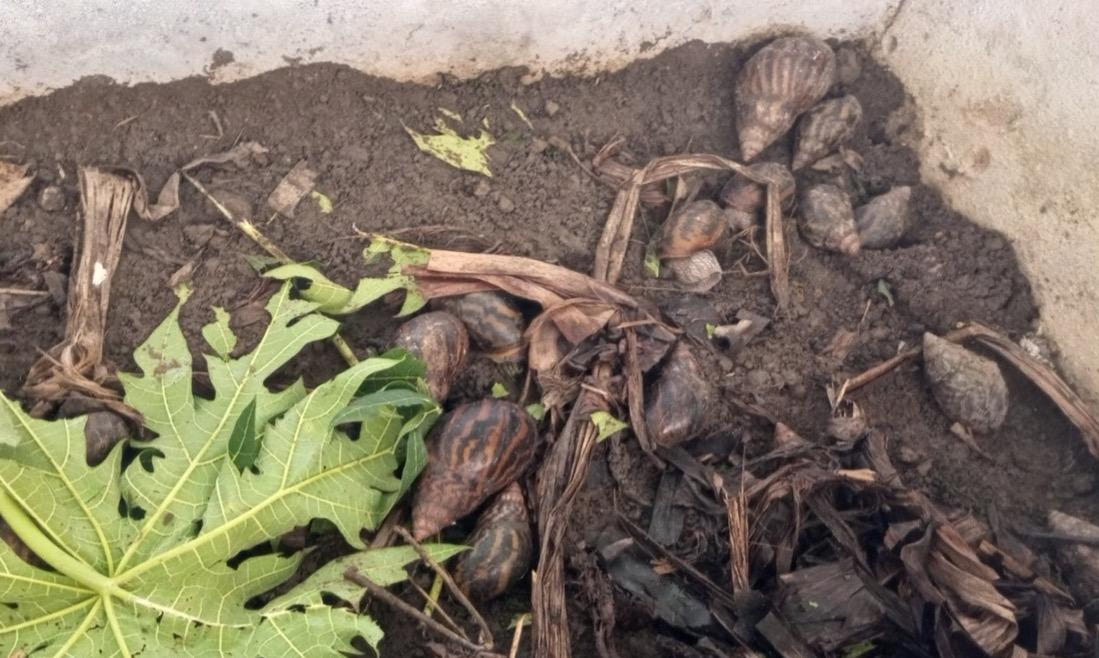 “We used these grants to build more compartments that will enable us to breed and supply over 100,000 snails all year round,” said Lankah. “We are also contemplating on moving to packaging for supermarkets and possibly for export.”

The inspiration to begin snail farming came to Lankah at a EurAfrican Forum in Nigeria. The forum is an action-oriented conference that encourages business collaborations between Europe and Africa. The forum gave Lankah the opportunity to network with other participants who were snail farming in their countries.

“Those people I interacted with were amazing,” said Lankah. “And they enthused me to go into snail farming after listening to some of their ‘ life-changing’ testimonies about the business. Agribusiness is a booster to most countries’ economies, and I think my venture will do the same in Liberia.”

Before winning these grants, Lankah graduated from the United Methodist University with a bachelor’s degree in economics. He holds several certificates in agribusiness, animal husbandry, and marketing.

Lankah had grown snails on a small scale before. He combined that experience with his formal training to successfully apply for the grants.

In Liberia, snails are eaten in palm butter soup, cassava leaves sauce or torgborgee in Lofa County. In Nimba, people eat them in GB soup. Some eaters roast them, too.

Snails are highly nutritious according to experts. They are rich in calcium, a mineral associated with healthy bones and teeth. Calcium also plays an important role in blood clotting, helping muscles to contract and improving nerve functions. Snails are also low in cholesterol, making them good for people with diabetes.

They are also high in protein according to George K. Matiah, the District Agriculture Officer of Sanniquellie Mah District, who has been a strong supporter of Nimba Ventures. Every cell in the human body contains protein, he said. It is important for growth and development in children, teens, and pregnant women.

“So there is a need for more snails to be grown in our respective communities to provide feeding for the population of our country,” Matiah said. “When snails are eaten regularly, the population will be healthy.”

Snails are not just good for eating. The slime of the snails is used to produce body lotion. Lankah says some of his agribusiness partners in Cote d’Ivoire and Nigeria are interested in buying it. Shells can also be used cosmetically.

Because snails have not been widely grown commercially, and sellers rely on suppliers from the wild, they tend to disappear in the dry season when the dry climate kills them off. Consumers have to travel to neighboring countries to buy them, driving up prices.

Commercial operations like Nimba Ventures have been able to overcome the challenges of the dry season by creating a perfect climate indoors.

The company has learned a lot about creating optimal conditions. The pens or compartments at the Saclepea centers contain a specific number of snails in order to create ideal spacing to avoid death among the snails.

“The slime of a snail is harmful to the other snails. So, the only way to curtail this harm is to space the snails,” Lankah said.

Lankah is planning a greenhouse system in Monrovia that will allow him to grow vegetables for the snails to consume.

“When our greenhouse is constructed, we do not have to be bothered by feeding the snails. Since snails are vegetarians, we will have to only plant vegetables in the house and they will feed themselves.”

The production rate of bred snails is very high. Each snail produces about 250 eggs at a time. One snail can lay eggs three times a year, totaling 1,750 eggs. This makes breeding snails on a large scale effective. It only requires the snail farmer to provide the right food and then prevent them from too much sunshine and rainfall.

The success of Nimba Ventures has been a benefit to many people in the county. Nimba Ventures employs 15 staff, mostly young people. The agribusiness also puts money in the pockets of community members by buying snail shells from them.

The shells are used to produce a calcium supplement that eliminates disease from wild snails before they are put in pens with bred ones.

One of Nimba Ventures’ young employees is Bobby Gaye, a 9th-grade student at the Johnny Voker High School in Saclepea City. His job is to feed the snails.

“I am happy to work for Nimba Ventures,” said Gaye. “The little stipend that I get from here is used to buy my copybooks, pens, pairs of shoes, and uniforms. I also use it to pay for my tests and other fees at the school which is really helping me.”

Gaye is also gaining knowledge about snail farming. He has learned how to sterilize the soil and bathe the snails. “I bathe the snails with cold water,” he said. “You have to take your own time to bathe the snails, lest you crush them. When the shell of the snail cracks, it automatically dies.”

District Agriculture Officer Matiah is a big advocate of snail farming and wants to see more support from the government and donors.

Matiah said the major investment cost comes up front with the construction of the pens but, after that, snail farming is easy and cheap. Because snails eat the leaves of cassava and pawpaw plants or peelings and other scraps, their food is free or very cheap. One ongoing cost is the “bone meal” or crushed calcium that allows the snails to produce sufficient eggs.

“Snail farming is a money-making venture,” Matiah said. “Right now snails are scarce on the Liberian market. But anyone who has a snail farm sells them like hotcakes. People run after you because they want to have their meal that contains snails.”

The Agriculture Ministry that I work for needs to engage our partners in the food security industry to provide support. We can also create access for our farmers to interact with our partners for more support.”

He would also like to see more awareness building across the country about snail farming, “Let’s allow our farmers to not only grow for selling but also encourage them to eat them, too.”

“Snail farming is a new phenomenon, so breeders need awareness on how to go about doing the farming.”

For now, producers like Nimba Ventures have the market largely to themselves and are making the most of it.

This story was a collaboration with New Narratives as part of the Investigating Liberia project. Funding was provided by the US Embassy in Liberia. The funder had no say in the story’s content.