The Executive Director of Serving Humanity for Empowerment and Development (SHED), Madam Joyce Queeglay-Pajibo recently represented the space of Liberian NGOs at the 60th anniversary celebration of Welthungerhilfe (WHH) in Berlin, Germany.

WHH was founded in 1962 as a National Committee for the Freedom from Hunger Campaign of the Food and Agricultural Organization of the United Nations (FAO). Today it is one of the biggest private development organizations in Germany with development and relief aid projects in more than 40 countries including Liberia. The anniversary commemoration of WHH this year aimed to get more attention for hunger in the world, to inspire even more people for solidarity and to get food for thought against the challenges of hunger.

As one of Liberia’s fast-growing national NGOs that is playing a key role in the fight against hunger, poverty, and injustice in the country, SHED’s Executive Director was invited by WHH to serve as one of the anniversary speakers to discuss the topics:  "Zero Hunger - What paths can and should we take?" and "How will we design development in the future?”

Pajibo is the first Liberian NGO executive to participate in the anniversary celebration of Welthungerhilfe and importantly, to serve as a foreign guest speaker on two separate panels for discussing global hunger issues.

Enriched with practical experience on integrated livelihood solutions for vulnerable populations in Liberia, Pajibo used the opportunity to share Liberia’s scenario at the Berlin event with a clear, realistic, and strong voice that highlighted Liberia’s development perspective and the need for local NGOs to lead some key development actions in their respective countries because, according to her, local NGOs have navigational skills and understand the local context much better than the international NGOs. “Local NGOs have the ability to produce greater results using less funding as compared to international NGOs,” said Madame Pajibo. 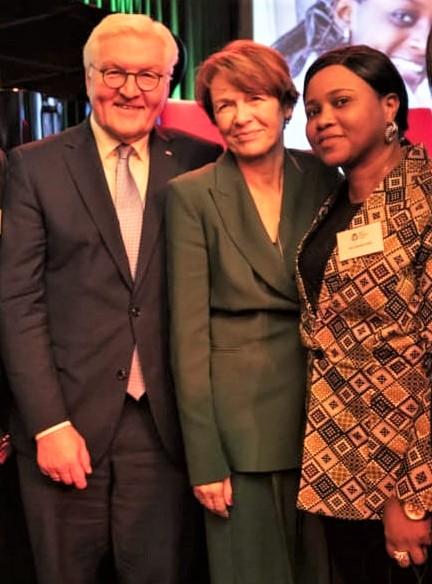 In his keynote address, President Frank-Walter Steinmeier said fighting hunger is a matter of fairness, which is why this fight also concerns rich countries. “If we want to win it, then we must all act together.” But that’s not all he said. “If we want to win it, then we too must change the way we think. Changing the way we think also means changing our own eating habits. We must stop wasting so much food because, as Amartya Sen says, the problem is not that there is a shortage of food, but rather that it is not distributed fairly, and that this increasingly also applies to arable land”. He further said, “As Federal President, I am convinced that the fight against hunger and poverty is and will remain a task for humanity, also at a time when we ourselves have to face huge challenges. We cannot and must not remain indifferent if ever more people in the world are hungry or even at risk of dying of starvation."