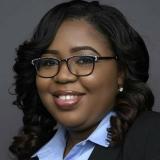 Excerpt from "It's A She", by Magdalene Matthews*`

As I look back over my life, Gabriel Baccus Matthews remains the person with the single greatest influence on me as an individual. From my decision-making to my career choices, the passionate approach I bring to things, down to the attributes I looked for in the man I eventually married, his fingerprints were left on nearly every aspect of my life.

Like most girls and their fathers, Dad and I had a peculiar relationship. Out there, he was “G. Bac,” “Gabe,” “Baccus,” “Chairman Matthews,” “Minister Matthews,” “Honorable Matthews,” to me, he was just Dad, or "the Papay." We had much in common. We were both left-handed, talked with hand gestures, and were highly driven, passionate people. As his only daughter, we shared a love for all things intellectual—discussing poetry, politics, fine arts, and classic literature. Dad loved to talk, and I loved asking questions. The more I asked, the more he explained, and the more I learned so much about so many things. When it came to his political stances, Dad felt a need to ensure I always heard his side of the story and not just the media's. He would go to such lengths to make sure I understood the motives for his actions, even if I disagreed with them. He taught me that there was a back story to everything. He went on to introduce me to Longfellow’s A Psalm of Life, which would become one of my all-time favorites:

"Tell me not, in mournful numbers,
Life is but an empty dream!
For the soul is dead that slumbers,
And things are not what they seem. [i]"

Dad was a deep thinker that encouraged me to always look at things critically, finding connections and synergies where possible. We shared a love for reading and literature that would be a hallmark in our relationship, his way of teaching me about life, you could say. If he wanted to show me life lessons on ambition, he would recommend I read Shakespeare's Macbeth. Politics and betrayal had to be Julius Ceasar; social inequities would be Victor Hugo's Les Misèrables, and strategy was Sun Tzu's The Art of War.

From world history to politics and the arts, Dad possessed an endless wealth of knowledge, which, for me, was as inspiring as it was intimidating. He would recommend books for me to read and authors I needed to know. Dad had a memory that could effortlessly recall lengthy verses of Shakespearean plays. He pushed us for academic excellence and made sure we gave schoolwork our very best, values instilled in him by his Mom. Years later, I chose a career path in the sciences. Still, much of my liberal arts understanding of world history, international relations, politics, and diplomacy would be shaped from the master class of life spent with my Dad, from lengthy conversations about Thomas Sankara, Marcus Garvey, Kwame Nkrumah, Martin Luther King, Sekou Touré, and Nelson Mandela.

As a father, Dad made sure to keep us in check. He taught us a sense of responsibility and pride in who we were as Matthews. With the dangers and challenges of life as politicians' children, he made sure we looked out for each other everywhere we went. “Never lose sight of your brothers” was the #1 ground rule.

As a political activist, he was principled. His life would be driven mostly by a burden for social change, centered on creating a more just society, an "equal playing field," as he would often say. Two quotes he’d often cite were by Otto von Bismarck, "Politics is the art of the possible, the attainable—the art of the next best,[ii]" and Alexis de Tocqueville, “In a democracy, the people get the government they deserve[iii].”

Looking back, I realize some of my fondest memories with Dad were the weeks we spent together in Accra in 2006 and 2007 as he was undergoing treatment in Ghana. I would learn many things about him, his motives, his aspirations, and his political backstory during those many weeks, just us two. For the first time in my entire life, I had my father all to myself, away from the crowds, the politics, the press, and life’s pressures. During this time, he would bequeath his side of the historical story; he would entrust me with something priceless: the words of a dying man.

If asked to summarize Gabriel Baccus Matthews’ most significant contribution to the course of modern Liberian history, in my view, Article 77 of the 1986 Constitution captures it succinctly. You see, the original text of the Liberian Constitution of 1847, Chapter 1, Article 11, Section 1, was abundantly clear:

“All elections shall be by ballot, and every male citizen, of twenty-one years of age, possessing real estate, shall have the right of suffrage[iv].”

The right of suffrage, i.e., the right to vote, was only accessible to male real estate owners. In a country where, for over 100 years, only property owners could vote, Dad’s push for multi-party democracy was the bridge to inclusive participation. A right guaranteed to all regardless of gender, social status, or land ownership. With the advent of democratic pluralism, Article 77 of the 1986 text, which covers voting rights, would later read:

“a. Since the essence of democracy is free competition of ideas expressed by political parties and political groups as well as by individuals, parties may freely be established to advocate the political opinions of the people. Laws, regulations, decrees, or measures which might have the effect of creating a one-party state shall be declared unconstitutional.

b. All elections shall be by secret ballot as may be determined by the Elections Commission, and every Liberian citizen, not less than 18 years of age, shall have the right to be registered as a voter and to vote in public elections and referenda under this Constitution. The Legislature shall enact laws indicating the category of Liberians who shall not form or become members of political parties.”

Baccus Matthews lit the match that would spark the flame of a movement for democratic pluralism after decades of mono-party rule. He led a group that reintroduced democracy as a free competition of ideas expressed by multiple political parties in 20th century Liberia. Thus granting every Liberian citizen, 18 years and older, the right to vote and chose their leaders, regardless of who those leaders might be. Late US Congressman and Civil Rights icon, John Lewis, put it this way:

"The vote is precious. It is the most powerful non-violent tool we have in a democratic society, and we must use it[v]."

Yet, to use it, the vote must be accessible to all. The ethnic diversity of the candidates contesting Liberia’s General and Presidential Elections in 1997, 2005, 2011, and 2017 shows increased democratic inclusion in recent Liberian history. On Baccus’ role in Liberian politics, as eulogized by Prelate Dr. Katurah York Cooper, she noted: “The thing speaks for itself.”

As a man, an activist, and a politician, Baccus Matthews was not without fault. It was the great Nelson Mandela that said:

In real life, we deal, not with gods, but with ordinary humans like ourselves: men and women who are full of contradictions, who are stable and fickle, strong and weak, famous and infamous[vi].'

Still, the role he played in recent Liberian history can never be ignored. For all their limitations and contradictions, the Progressive Alliance of Liberia (PAL), along with the wider actors of the Progressive Class of the 1970s, will be etched in time as the pioneering shoulders upon which current political movements stand. In a moving tribute, famed Liberian Journalist, Joseph Bartuah, writes:

“Like all mortal beings, Baccus was not infallible. There were times that he erred in his political activism, in terms of some public pronouncements and certain decisions he took. However, one thing is certain: Even some of his staunchest critics will reluctantly concede that he was an exceptional revolutionary who played a significant role in Liberia’s forward march towards the covetous culture of democratic pluralism[vii].”

President Ellen Johson Sirleaf would also come to write of him:

“The two of us often found ourselves in contention; we did not always see eye to eye, but we both worked long and diligently to serve our native land. But by the time of his death, many decades later, I meant it when I called him the Godfather of Liberian Democracy and said he had left an indelible mark on our country’s political history. Despite the many contradictions he represented, Gabriel Baccus Matthews will be remembered as one of Liberia’s greatest sons.[viii]”

As children of a man driving a cause, we had to accept to share our father every day of our lives—with his people, his purpose, his passions, and his politics. His fatherly counsel, seasoned wisdom, and political acumen would extend to many throughout his life. He was our father, but he was never ours alone. At 59, after a battle with cancer, Dad died in the arms of the Liberia he so loved. His weeklong burial, too, would include both quiet family and traffic-stopping public ceremonies, again making room for the many who needed to pay their last respects. Of course, I longed to have had my father around much longer, to share his wisdom on my writings, to cheer me on at my graduations, to march me down the aisle, to meet his bubbly grandkids. Yet, for however long we had him, he left indelible footprints in our hearts and in the sands of time.

“Until the lions have their historians, the history of the hunt will always glorify the hunter[ix].”

History will remember Baccus Matthews based on who the storyteller is. Depending on which side of Liberia’s geopolitical divide a person’s ancestry found itself during Baccus Matthews’ active years, the story will be told from a different vantage point. But with the hard-won introduction of universal suffrage, Baccus Matthews secured a seat at the decision-making table for all Liberians irrespective of social class. For better or worse, objectively, that is what he will be most remembered by.

What he managed to accomplish in his life and nation will be recorded in Liberian history for generations to come, leaving his children and followers as the custodians of that legacy. As divergent as the views may be, one thing is certain, for all his imperfections, Gabriel Baccus Matthews' legacy in the history of Mama Liberia will remain forged in the crucible of time.

*** *Magdalene Matthews is a Water, Sanitation, Hygiene (WASH) and Development Specialist and Published Author. Her second book, and real-life recollection, “It’s A She, A Tale of Life, Loss & Love” can be purchased at a Stop and Shop Supermarket near you.