For six years, Martha Sherman, a widow, has battled chronic pain as a result of damaged tissue in her body. Since then, life has been tough for her as she lost her business because all of the money was spent on her treatment.

But thanks to a recycling initiative in Monrovia, Greener Inc, which turns plastic waste into tiles, she can now smile again and fend for her family.

“I go to dumpsites or sometimes send my grandchildren to collect the plastics then bring them to the company to sell,” said 57-year-old Sherman, who is also a grandmother of three.

Plastic waste is an increasing plague in Monrovia. Streets and alleys are inundated with plastic, especially the sachet water plastic bags, with municipal authorities struggling to deal with the situation. Experts say the best way to tackle plastic pollution is to recycle and limit production.

“Plastic pollution in Liberia is bad. People throw plastics everywhere. They stay in the environment for 100 years. Plastic must be contained and recycled,” says Dr. Eugene Shannon, former Minister of Mines and Energy, now President of the Natural Resources Development Corporation.

Plastics constitute 14.2 percent of Monrovia’s waste, according to Research Gate, a Germany-based network of scientists and researchers. With limited knowledge of the impact of plastic trash on the environment, many communities burn or bury their trash. The smoke emanating from the plastic is released into the atmosphere leading to air pollution.

As the world battles climate change and the COVID-19 pandemic, women are most likely to suffer unemployment, flooding, abuse and domestic violence, experts warn these impacts might get worse.

The African Green Stimulus Programme addresses waste management as one of its elements. It outlines that managing chemicals and wastes will significantly improve how goods and services are produced, consumed, reduce and create jobs that will empower women, mobilize youth and contribute to reducing pollution.

The startup recycling enterprise has now created employment for Sherman and many women in Monrovia by purchasing the plastic trash they collect.

Miatta Karr became jobless due to the Covid-19 pandemic. She used to be a domestic worker.

With the establishment of the enterprise, Karr immediately joined other women in the community to collect trash and sell it to the enterprise.

“Just by picking plastics from ordinary dumpsites, I make up to US$30 to US$40 a week. People employed in offices don’t make this amount,” said Janet Turay, another woman who is also involved in plastic waste collection across Monrovia.

But it’s not an easy task for many. Picking trash from dumpsites is not a task many people would prefer.

“People can be laughing at me when they see me picking trash. They call me a crazy woman but I don’t care as long as I am being paid,” Teta Tweh, a mother of four says.

When 57-year-old Kemah Johnson saw the money she was earning from the sales, she quickly mobilized other jobless women from her community to join the venture and they are also benefiting.

Aside from the money they are earning from the collection of trash, the waste has reduced in their community and they no longer experience flooding as a result of the plastic blocking drainages.

“Although I am earning money, I am not concerned about that. This picking of plastic has reduced waste in our community,” said Olivia Johnson.

According to her, the money she earned from the plastic is used to feed and clothe her children besides keeping them in school. 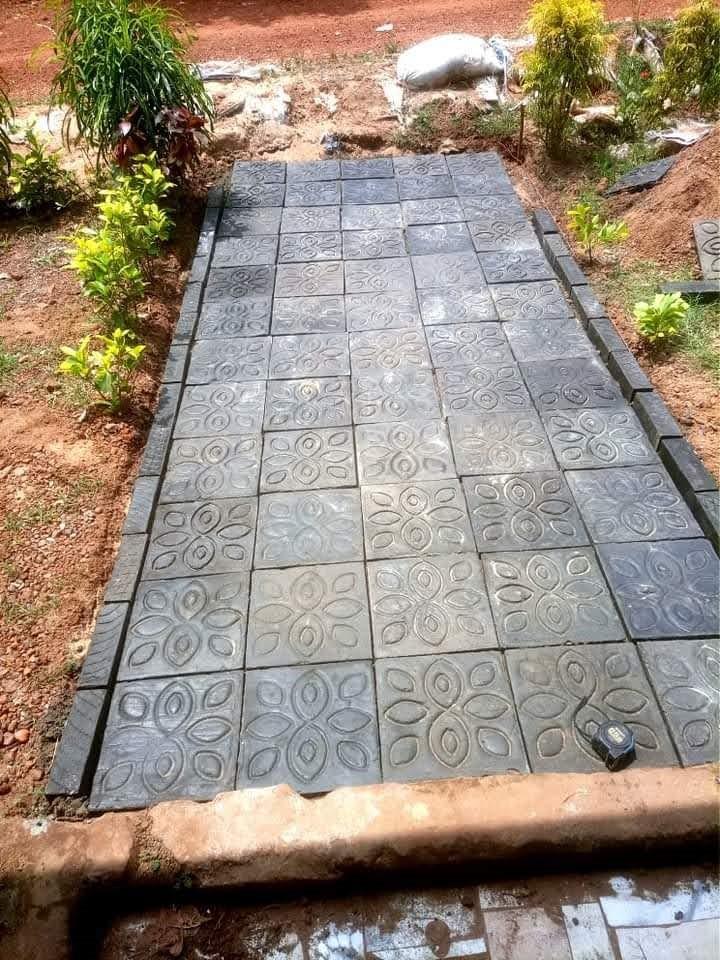 Some of the pavement tiles layouts are made from recycled plastic waste collected by women in Monrovia. Photo/Tina Mehnpaine/African Women in Media (AWiM)

Discarded plastic is choking waterways, blocking drains, killing fish, and releasing harmful chemicals into the water and soil. A 2016 report by the World Economic Forum states that by 2050, there will be more plastics in the oceans than fish if the current trend of plastic pollution is not reversed.

“Imagine you are in a car, some garbage is being burned, your first experience is to inhale the terrible smoke,” said Dr Lyndon G. Mabande, Registrar General at the Liberia Medical and Dental Council. “What comes out of the smoke are certain chemicals. These chemicals are very dangerous to the lungs. You think you are inhaling oxygen but, in truth, you are inhaling carbon monoxide that will affect your lungs,” he said.

World leaders and Environmental experts recently convened to develop a first-of-its-kind global treaty to control plastic waste. The agreement addresses the full lifecycle of plastic, from its production to its disposal.

Inger Andersen, the Executive Director of the United Nations Environment Programme (UNEP), described the resolution as the most substantial environmental multilateral deal since the Paris Agreement, a landmark accord signed by 196 countries in 2015 that aims to limit global warming to below 1.5 degrees Celsius.

“Today marks a triumph by planet earth over single-use plastics,” Andersen said in a statement.  “It is an insurance policy for this generation and future ones, so they may live with plastic and not be doomed by it.”

“Plastic pollution has grown into an epidemic,” Espen Barth Eide, president of the U.N. Environment Assembly’s fifth session and Norway’s minister for climate and the environment, said in a statement. “With today’s resolution, we are officially on track for a cure.”

The treaty will not only curb the amount of plastic pollution but will also reduce greenhouse gas emissions associated with producing the material since plastics are made from fossil fuels.

The government of Liberia does not have any recycling method to address plastic pollution. Both public and private waste end up in landfills and the environment thereby causing flooding. Globally, women are most likely to experience poverty and have access to less socioeconomic power than men.

“We were able to acquire a machine that helps us shear the plastic.  After shearing, we melt the plastic. When it’s melted, we mix it with sand to produce the pavement tiles and bricks,” said Synanna Gbollie, founder, Greener, Inc.

“We buy all of the types of plastics, except the PVC (Polyvinyl chloride), the one they use for the sewage system. We have done awareness in various communities.  We talked to people to bring the plastics so that we can buy from them,” he said. “We buy the plastic for L$10 per kilogram or 250 pieces.  It is challenging because we are a self-funded startup company. Our mode of production is labor-intensive; it’s not the safest means of production but that’s what we can afford at this moment.”

Gbollie has been pleased with the success of his initiative as it has seen a reduction in plastic waste and created employment for women.

He hopes other people can borrow a leaf toward a cleaner and safer environment while at the same time empowering women.

This story was produced as part of the African Women in Media (AWiM/UNEP Africa Environment Journalism Programme.)