A Beneficial Ownership (BO) regime is poised to begin in Liberia, aimed at helping to curtail tax evasion, fight frauds and other forms of corruption. According to the national steering committee of the initiative, headed by the Liberia Extractive Industries Transparency Initiative (LEITI), the initiation of the regime will lead to the robust mobilization of domestic resources, and build confidence in the political, social, and economic governance of the state, as well as attract investments.

In an effort to ensure the establishment of this corporate transparency regime, Liberia and some international partners such as Africa Open Ownership (AOO), Open Data Services (ODS) and others last year embarked on the establishment of a framework that would guarantee that this is realized.

A BO regulation has since been drafted by the steering committee, which comprises LEITI, the Liberia Business Registry (LBR), Liberia Petroleum Refining Company (LPRC) and others, in collaboration with partners.

The validation of the draft regulation was held last Thursday at a local resort in Monrovia where opinions and views were solicited by the drafters as a way of making the document more inclusive and comprehensive.

“The BO is of national interest and so we thought it prudent to engage the relevant stakeholders around this,” the head of LEITI secretariat, Jeffrey Yates, said. “We are also glad the government has committed itself to this initiative.”

Liberia’s journey towards achieving corporate transparency and tackling illicit financial flows presents a multitude of opportunities, he said. However, these opportunities can only be maximized if the government and other major stakeholders have a clear understanding of the current regime on beneficial ownership, the gaps with this regime and the practical steps needed to make progress.

This means the utilization of Open Ownership Principles (OO Principles) — which set the international standard for effective beneficial ownership disclosure. The OO Principles are intended to support governments implementing beneficial ownership reforms and guide international institutions, civil society, and private sector actors in understanding and advocating for effective reforms, according to the Open Ownership website.

Effective disclosure needs high quality, reliable data to maximize usability for all potential users and to minimize loopholes,” it says.

“This is why we embarked upon this BO initiative in an effort to advance beneficial ownership transparency reforms in the country,” Yates noted at the validation conference—which was held to discuss the draft BO regulation and form to be published upon validation by stakeholders. The publication will then lead to the creation of the BO register that will be launched thereafter.

“All of these are geared toward ensuring corporate transparency in the country,” the LEITI head of secretariat said. “A Beneficial Ownership regime is important for the country and it is everyone’s business.

The head of the Liberian Business Registry, Samson Dee said though there is a 5-year timeframe for the realization of the initiative, the steering committee wants to ensure that the document is achieved in a shorter time frame.

“We want to ensure that we finalize this document in the first quarter of next year if everything goes well,” he said.

When it comes into effect, the regulation will help the government raise the needed funds for economic and infrastructural developments.

“We want everyone to know or have an idea of what the BO regulation is about, so we have brought together people from CSOs, concessions affected communities, private sector and others,

With the caliber of people we have brought here, we are hopeful that we will have a very fruitful discussion. We are confident that at the end of the day, we will leave from here with a document that will culminate into a regulation.”

For Favour Ime, she craved honest feedback from the stakeholders at the conference. Ms. Ime, who is the Regional Manager of Africa Open Ownership, noted, “We really want them to share their thoughts and opinions with us.”  “We also want to see whether they can test the drafted forms/regulation and whether they can actually use it to make improvements—have them finalized so that the government can make it into law.”

The young Lawyer is a consultant on the project. She looked forward to engaging representatives of the private sector “because at the end of the day,” she said, “it is the Lawyers and companies that will end filing the forms and adhering to the regulations.” 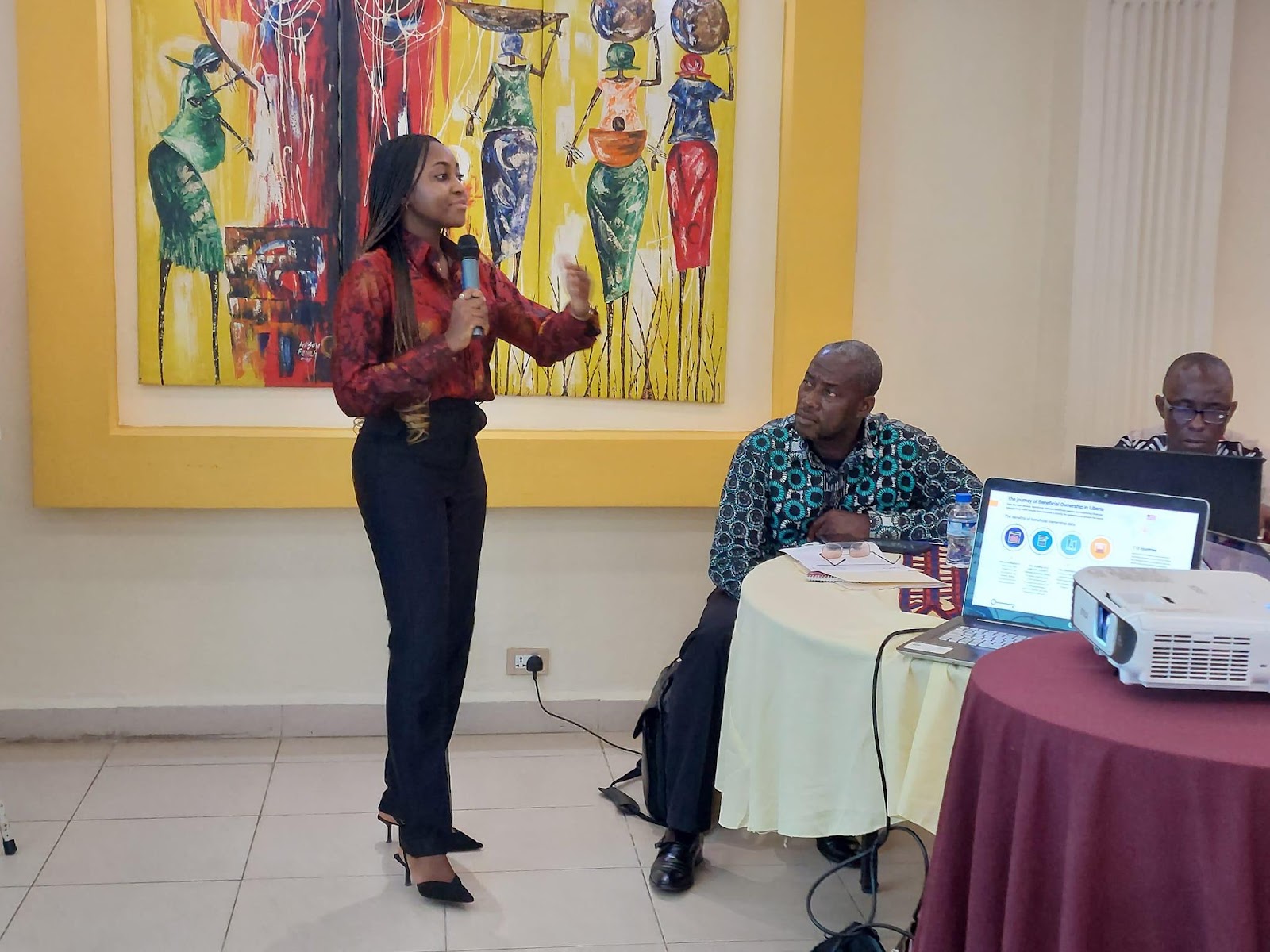 The draft regulation was done last august in consultations with stakeholders from across the country. “We went away, did some thinking, and put the draft regulation together. So we are here today to show the results of the work we did, and to solicit feedback.

Africa is Rich, But Poor

When the regulation becomes law, it is expected that companies will now be more transparent about the people who actually own them,Ms. Ime said.

“Corruption is draining Africa and is keeping its people very poor,” she said in a brief presentation. “The people are cheated of their resources by both officials of government and people within the private sector.  There is a lot of corruption that goes on in the government, especially when it comes to procurement contracts. In the extractive sector, we are looking at the issuance of mining licenses.

“For the private sector, it is there that the identities of the true owners of companies are hidden. The accountants, and lawyers shield companies’ owners.”

She said it is a shame that Africa and Africans are the poorest globally despite the continent being the richest in the world.

“Africa is the richest continent in the world. We have so many natural resources, intelligent minds, yet we are the poorest. This is an irony. This means that something is wrong, and something must be done. This is the reason we are here,” she added, “But our gathering is just one step in the right direction and we want to thank the government for this. But a lot more needs to be done.”

However, in the absence of a BO regulation, the LEITI has been working to ensure that companies operate with transparency. In the extractive sector, the anti-graft body has been requiring companies to declare their ownership, how much they are making periodically and contrast against what those companies remit to the government in taxes and other forms of payments.