Editor’s Note: The story was originally published by The DayLight and is republished by the Daily Observer as part of a partnership.  James Harding Giahyue, with DayLight

Minister of Posts and Telecommunications Cooper Kruah holds shares in a company actively mining and logging in Liberia, a violation of laws governing the two industries as well as a breach of the Liberian Constitution and the Code of Conduct for Public Officials, an investigation by The DayLight has found.

Kruah holds five percent of the shares in Universal Forestry Corporation (UFC), according to the firm’s legal document. UFC has had 11 mining licenses since his appointment in February 2018, records of the Ministry of Mines and Energy show. The company had held a few logging concessions prior to Kruah becoming a cabinet minister. However, it began to acquire a flurry of mining licenses after he became the Postmaster General. The company currently has a logging agreement.

Of the nearly one dozen UFC mining licenses, 10 are for semi-industrial-scale gold mining, prospecting,  and dealer licenses, and the other is a diamond broker license. Four of these permits are still active. The company operates the mines and dealerships in Montserrado, Grand Bassa and Nimba. One of its goldmines in Nimba had been the setting of a 2019 mine accident, which killed at least five people, according to the BBC.

His equity in UFC is a violation of the Minerals and Mining Law of 2000. The statute debars “the President of Liberia, the Vice President of Liberia, any member of the National Legislature, Justices of the Supreme Court and Judges of the subordinate courts of records, cabinet ministers, managing directors of public corporations during their tenure in office.”

Kruah had established UFC in 1986 with an initial 25 percent shares, which reduced to five percent when the company amended its article of incorporation in 2007, the document shows. Its other shareholders include Edward Slangar, former advisor to the late President Samuel Doe, and B.J. Kim and Jin Kyung, two foreign nationals. Kruah also serves as the secretary of the company’s board of directors and has been cited in official communications, seen by The DayLight, as its lawyer.

To prevent a conflict of interest, the law mandates a government official to either “dispose of such mineral right or place such mineral right in a blind trust,” a business that takes care of private investment interests without the interference of the owner. There are no records that Kruah, who has been fighting cybercrimes,  has done either of those things.

Kruah faces a US$2,000 fine, a 24-month prison term, or both penalties if convicted in a court, according to the mining law.

A mine in Nimba County operated by Universal Forestry Corporation, one of whose shareholders is Minister of Posts and Telecommunications Cooper Kruah. The DayLight/James Harding Giahyue

The Ministry of Mines and Energy did not respond to The DayLight’s queries for comments on the matter up to press time. We will update this report once it does.

UFC also has a logging agreement with Sehzueplay Community Forest in Tappita District, Nimba County,  the same region the company operates the majority of its goldmines. The agreement for the 8,690-hectare rocky woodland was signed on January 30, 2020, nearly two years after Kruah’s appointment.

That, again, breaks the National Forestry Reform Law, which rules out public officials from holding any logging permit above one percent. Like the mining statute, the forestry law compels an official of government to transfer ownership of the “entity outside the person’s influence and control, such as an unrelated individual or a blind trust…” There are no records that Kruah has done that as well.

The Forestry Development Authority (FDA) approving UFC’s agreement with Sehzueplay with Kruah one of the company’s shareholders also breaches the FDA Ten Core Regulations, a set of dos and don’ts of the logging sector. Regulation 103-07 in particular disqualifies companies whose shareholders are members of the government from being prequalified for logging licenses.

The Managing Director of the FDA Mike Doryen told The DayLight in a mobile phone interview that the agency was investigating the matter. “Rest assured, we will take the appropriate action,” Doryen said.

Conflict of interest carries a fine between US$10,000 and US$25,000, up to three times the sum Kruah has received from his equity in UFC, or a prison term of up to 12 months, according to the National Forestry Reform Law.

It is not the first time that UFC has violated forestry legal frameworks. It was involved in the notorious  Private Use Permit (PUP) Scandal, in which an estimated 2.5 million hectares of forests—or 23 percent of the country’s landmass—was illegally awarded to logging companies. A government-backed inquest found the company broke the law in different instances while logging in Geetroh, Butaw District of Sinoe County between 2010 and 2012. That investigation found that UFC did not have an environmental permit or a certificate to harvest trees and that it paid community benefits into a personal account. UFC’s PUP and 62 others were canceled and a moratorium remains in place on the permit.

Kruah’s stakes in UFC are also a breach of the Code of Conduct, which defines conflict of interest as “when a public official, contrary to official obligations and duties to act for the benefit of the public, exploits a relationship for personal benefit.” Under this law, he faces a fine, suspension and dismissal, among other penalties.

The Code of Conduct has its roots in the Liberian Constitution, which says, “No person, whether elected or appointed to any public office, shall engage in any other activity which shall be against public policy, or constitute [a] conflict of interest.” 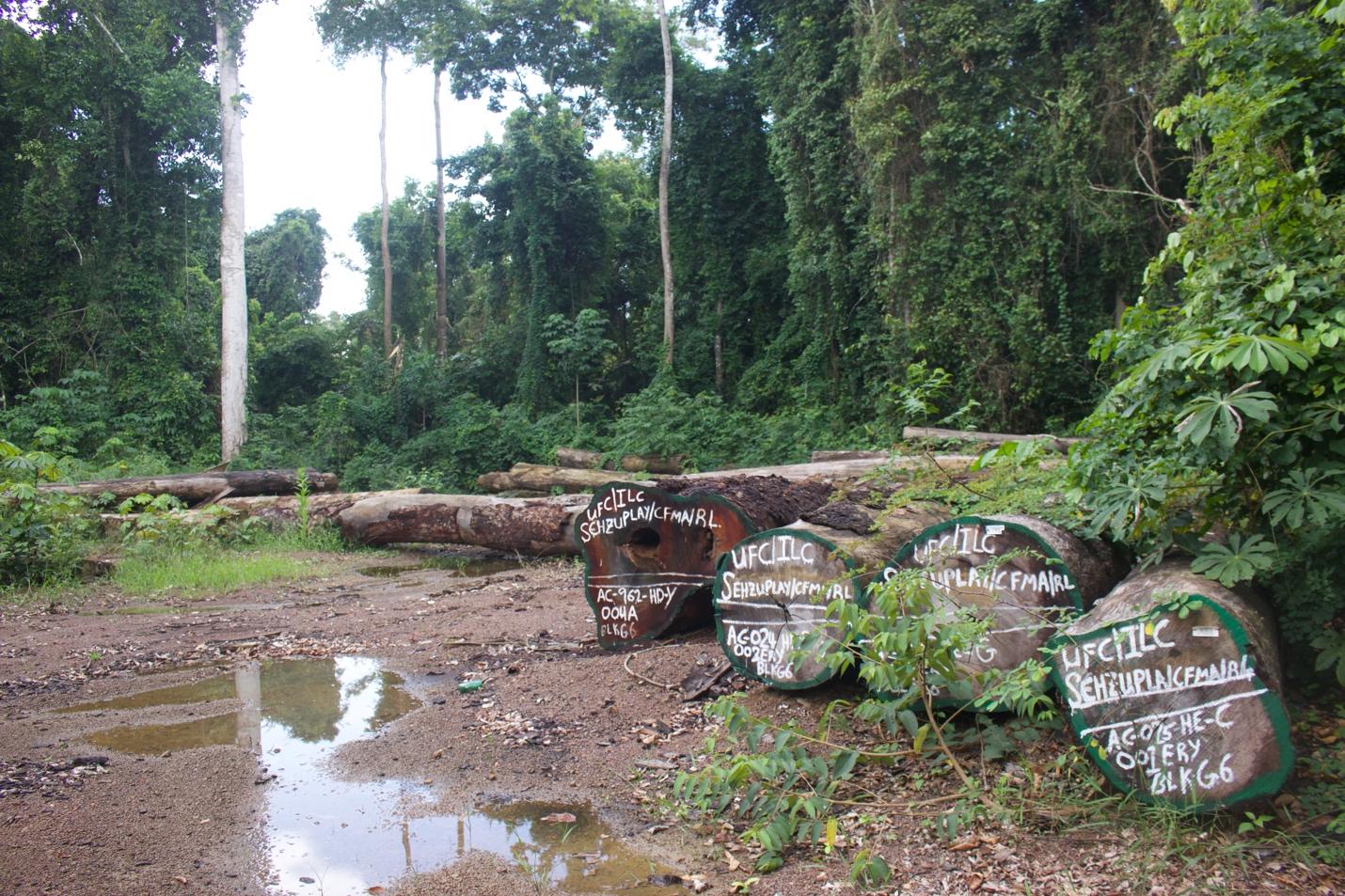 Some of the logs Universal Forestry Corporation illegally felled in the Sehzueplay Community Forest in Nimba County. The DayLight/James Harding Giahyue

Jin Kyung, UFC’s general manager, denied Kruah is a shareholder in the company. Kyung said the copy of the company’s legal documents The DayLight has was not genuine but refused to share his copy, claiming it was a private document. That claim is wrong as a company’s article of incorporation is a public record under the Business Corporation Act and the Freedom of Information Act as well as the logging law.

Kruah did not grant The DayLight an interview on his violations, asking us to “publish anything you want to” in November last year. He had accepted our request for an interview but insisted we did not record the conversation.

The news comes barely a week after the Liberia Anti-Corruption Commission (LACC) called for the prosecution of several officials of government, including Minister of Agriculture Jeanine Cooper, for alleged conflict of interest.

This article is the first in a three-part series on Minister of Posts and Telecommunications Cooper Kruah’s conflict of interest as a shareholder in Universal Forestry Corporation, a mining and logging company operating in Grand Bassa and Nimba.

It was produced as part of a collaboration with the Center for Transparency and Accountability of Liberia (CENTAL), with funding from the Swedish Development Agency (SIDA). It is an activity under the CENTAL’s ongoing National Integrity Building and Anti-Corruption (NIBA) program.