James Harding Giahyue, with The DayLight

The Civil Society Oil Palm Working Group (CSO-OPWG) and representatives of communities affected by alleged land-grab have called on the government to nullify customary land deeds it has issued that arose from tribal certificates.

In a side event at the ongoing National Land Conference in Buchanan, Grand Bassa County, the group called on the Land Authority to halt its issuance of tribal certificates in order to “reverse elite land-grab” in the country.  A report published last month by the CSO Land Reform Working Group (CSO LRWG) found the Land Authority issued 11 deeds to individuals in Nimba and a community in Bomi from tribal certificates in the absence of regulations and without the participation of campaigners. 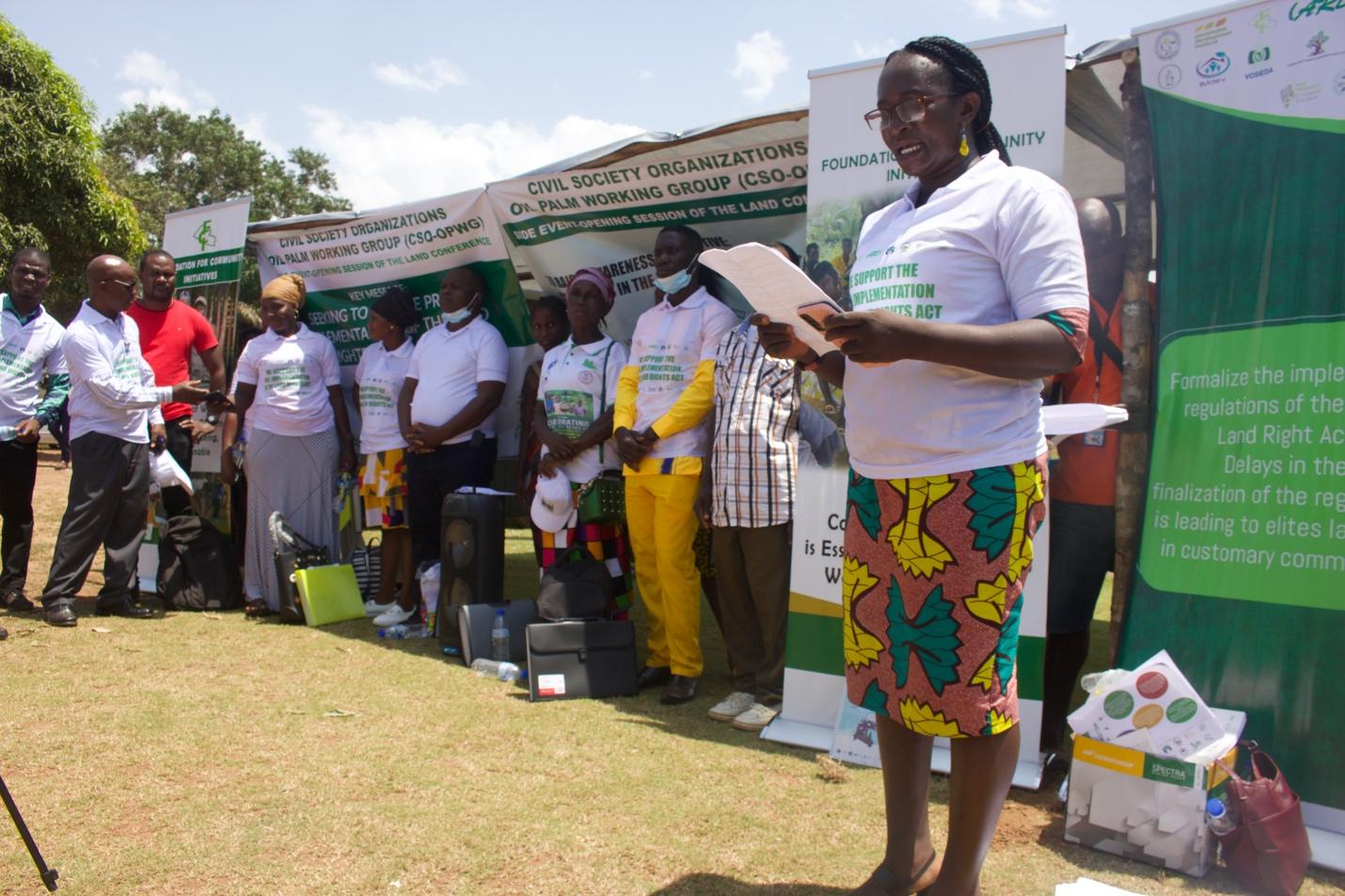 Renée Gibson, a member of the CSO Oil Palm Working Group, reads the group’s position at a side event at the opening of the Land Conference in Buchanan, Grand Bassa County. The DayLight/James Harding Giahyue

There have also been reports of current and former government officials, and influential business people claiming community lands across the country. Dubbed by civil society organizations as “elite land-grab,” the practice has seen many communities lose their ancestral land.

“We, the community representatives from Grand Bassa, River Cess and margibi, Bomi and Cape Mount issue this declaration to highlight some of the most critical issues that must be addressed in the implementation of the Land Rights Act and are priority discussions for the National Land Conference,” the group’s statement, read by Renée Gibson of the Rural Integration Center for Community Empowerment (RICCE), said.

“This important meeting needs to take stock of the challenges since the passage of the law in 2018,” the statement added. 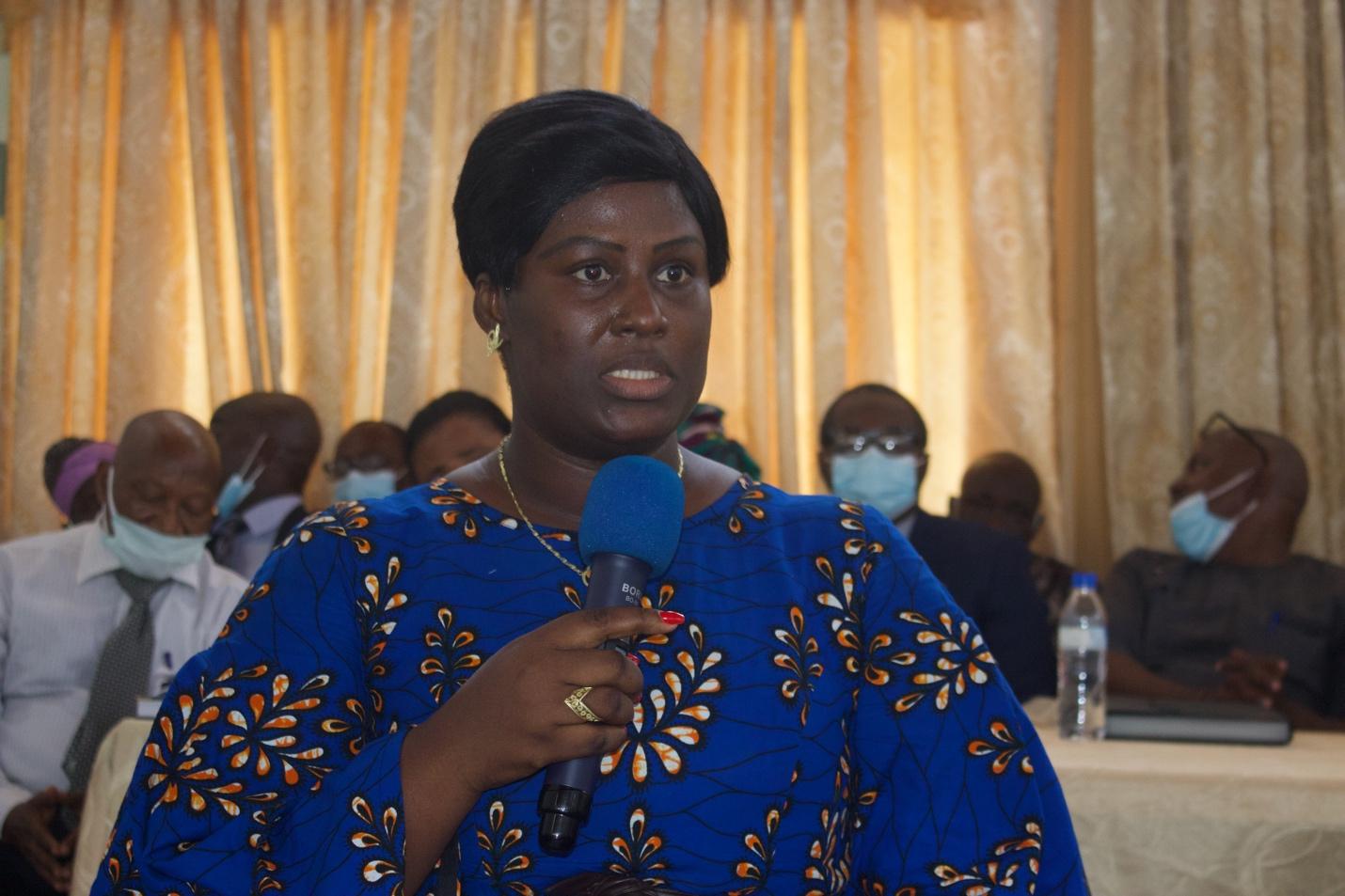 Loretta Pope Kai, chairperson of the National Civil Society Council of Liberia calls on the government to halt its issuance of tribal certificates and nullify deeds already granted from the papers. The DayLight/James Harding Giahyue

“This is key to halting and reversing land-grab,” she said. Those remarks were first made by Loretta Pope Kai, chairperson of the Civil Society Council of Liberia, at the opening ceremony of the Land Conference inside of the Buchanan City Hall.  Mrs. Pope Kai said the call to halt the granting of tribal certificates was in line with the law.

The Chairman of the Board of Commissioners of the Land Authority Atty. Admas Manobah denied that the institution was wrong to sign deeds without guidelines and regulations. He said the Land Authority was conducting a trial on communities it had already given deeds.

Manobah also denied any wrongdoing for vetting tribal certificates without the awareness and participation of civil society, saying the law did not mandate that. “The validity of tribal certificates shall be determined by a rigid validation process involving the community conducted by the Liberia Land Authority,” according to the relevant provision of the law (Article 47).

Tribal certificates are arguably the most troublesome subject in Liberia’s land reform process. Chiefs and elders across Liberia had issued thousands of tribal certificates to individuals as a kind of title to lands in towns and villages. However, in many cases, the chiefs did not consult other members of the communities.

To address this problem, the law requires tribal certificates to be legally processed into deeds with the involvement of full membership of communities—men, women and the youth—that own the lands for which the documents were issued. The Liberia Land Authority is yet to formulate regulations for the implementation of the law, including the vetting of the controversial documents.

Liberia made history in 2018 when it passed into law the Land Rights Act, a landmark for recognizing rural communities’ ancestral land rights and recognition of women’s land ownership. Held under the theme: “Celebrating three years of the Land Rights Act,” the conference is expected to review the progress made since the creation of the law, challenges in its implementation and meeting those challenges in the future. The event brought together 165 delegates, and is expected to end on Thursday with a resolution.

The story was originally published by The DayLight on March 1, 2022 as part of its Elite Land-grab Reporting Series.