"We made it clear from the beginning that we will be collecting a little remuneration to enable us to beef up our operations and, if they refuse, it will be the government through the Justice ministry who will evict them and not LBS," Estelle Liberty Kemoh, Director-General, Liberia Broadcasting System

Cynthia Menneh has lived in the Gobachop community for twenty-five years, squatting on a portion of land she acquired in 1997 from the Liberia Marketing Association’s authorities.

On this land, she built a three-bedroom house. She is just one of the hundreds of other squatters who have built homes on the land. Now they are expected to become tenants because the Liberia Broadcasting System (LBS), which owns the Gobachop land — about 149 acres in all — announced a plan to collect rental fees.

They are being asked to pay US$5 per month for a makeshift structure and more for a concrete structure, leading to hundreds of thousands of dollars in potential revenue for LBS due to the huge population and housing size of the area.

"When I came here, this place was full of human skulls, bones, and huge trash. I paid people to clear the area and build my house. I am appealing with LBS to see the efforts we made to develop this place and pardon us for living here freely," she said.

Cynthia, now 60 years old, and like many Gobachop squatters are poor and struggling to survive, explained that she found herself in the area as a result of the civil war. She added that she escaped from Gbarpolu County to Monrovia with her family, and then Gobachop became a home.

Gobachop is a slum in Monrovia that is in the throes of inadequate housing and poor sanitation. Monrovia’s rapid growth since the end of the war in 2003 means slum dwellers make up 70 percent of the city’s population, according to a Cities Alliance report.

Most of the people living in the Gobachop community do not have regular jobs and have very little income. Most say they would not stay if they could make a living anywhere else. Many came here during the war; others have come since then as Liberia’s population has exploded.

"We came and developed this place when it was abandoned by LBS.  We have lived here freely as house owners and not tenants. We cannot become renters overnight," said Freeman Togba, 64.

The  LBS is a state-owned radio and television network, founded in 1960.  Now the broadcaster is preparing to collect rental fees in an area that has long been known as a market ground for thousands of marketeers and petty traders in RedLight.

Until last year in July, when the government relocated them to Omega land, Gobachop was teeming with sellers and thieves, all in the midst of mountains of garbage.

Now the only occupants are the residents who were left behind when the business people were forced to relocate.  The area also served many underprivileged young people from Paynesville and its environs who have called it home for many years. Gobachop suffers from serious sanitation problems.

The LBS move comes as the country experiences widespread poverty and inequality which, according to the  IMF in its Staff Country Report Volume 2021, is preventing people from achieving their potential as they face some form of income or food insecurity and vulnerability. Also ore than half of the population 50.9 percent now lives below the national poverty line — this is according to the World Bank, citing the 2016 Household Income and expenditure survey — a figure translates to roughly 2.3 million Liberians. 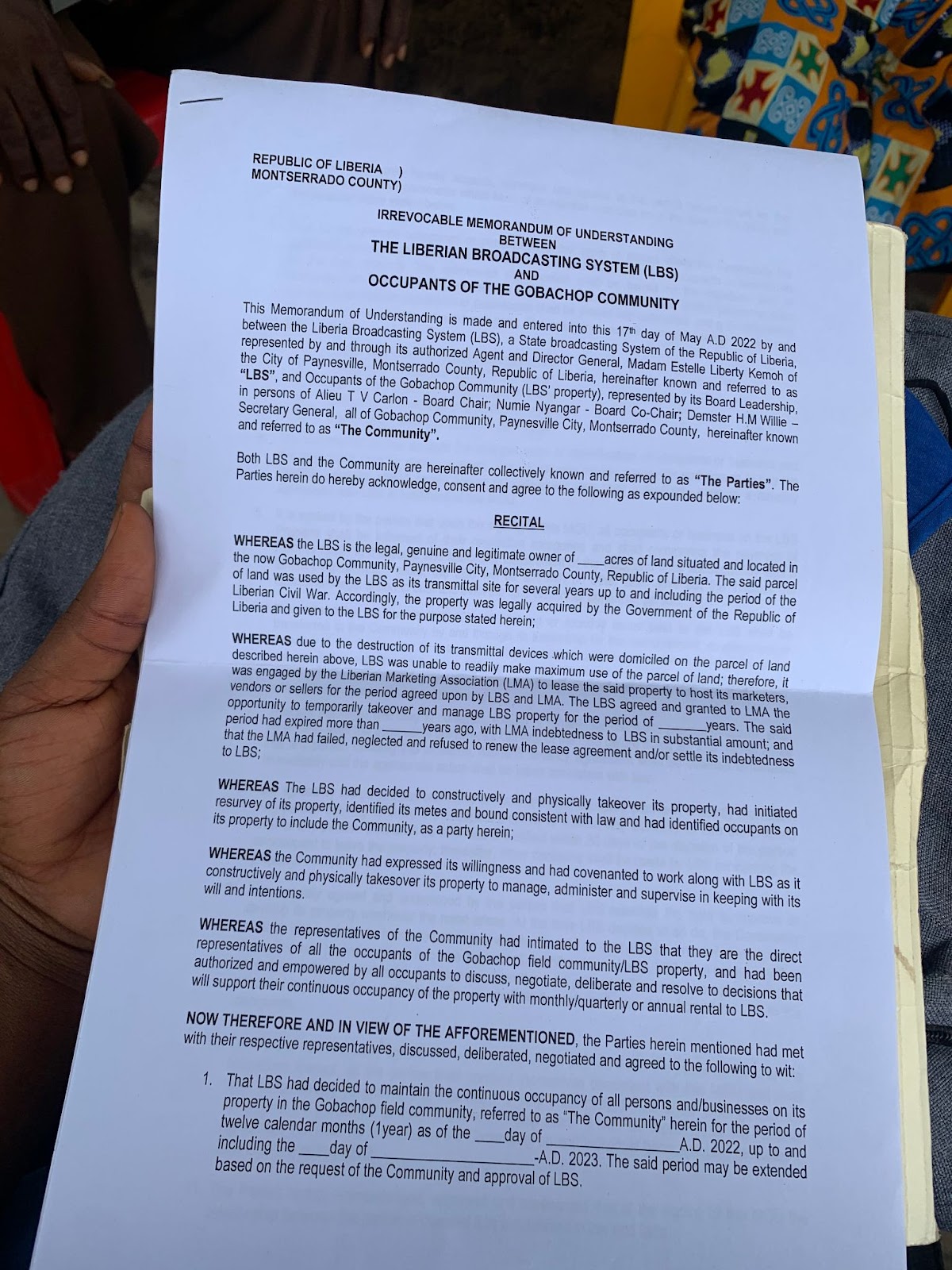 Copy of the draft Memorandum of Understanding that was sent to the community leaders.

For the LBS authorities, regardless of the high rate of poverty in the country,  their action is non-negotiable as they need the rental fees to support broadcast operation activities.

This hardline stance, according to LBS Director-General Kemoh, is in line with the Act that created the LBS, which mandated that the government provide 60 percent support to the network while it generates the remaining 40 percent on its own. Thus, the Gobachop land can be used for that purpose.

“We made it clear from the beginning that we will be collecting a little remuneration to enable us to beef up our operations, and if they refuse it will be the government through the Justice ministry who will evict them and not LBS,’’ Liberty Kemoh said,

She claims that the minimum payment for makeshift homes will be US$5 per month — less than what LMA was collecting them, “They have to pay something, which puts everyone in a win-win situation. We have to generate some funding from our property to help us here. We have challenges.”

“We have seven sub-stations across the country to fuel. We have to meet up with 40 percent of what the government is not fulfilling. It’s expensive to run a broadcast institution," Liberty Kemoh added.

However,  for Gobachop Community Chairman Isaac Duoana, the LBS move is  counter-productive towards the wellbeing of hundreds of squatters who have invested all their life savings on the land.

“When people hear about this news, they just panic. They have nowhere else to go.  They are so frustrated right now and now, we are pleading to LBS to allow them to live freely,’’  Duoana added.

Duoana added that in the past, rental fees were collected only from business owners by the LMA and not the residents. However, he said the LBS measure required fees from both business owners and homeowners.

“It said that after the place has been developed, the same people who spent their money to do so are about to become tenants of the houses they built.”

Squatting in Monrovia is increasingly becoming a matter of concern. People find open land, build and develop; at the end of the day, the government comes to take ownership of the land.  According to a 2011 report by the Norwegian Refugee Council, “the issuance of squatters' rights is, in reality, simply an established de facto practice that is broadly accepted but not clearly legal.

Regular payment of the fee entitles the holder “to occupy the area until such time as the government fines [sic] it necessary to use the land in which case, one month’s notice will be given to vacate the premises.” The report, titled, “Beyond Squtters’ Rights: Durable Solutions And Development Induced Displacement In Monrovia, Liberia”, published in May 2011, cites a provision of the 1957 Zoning Code on non-conforming structures as the basis of the informal practice of granting squatters’ rights.

According to the Liberia Housing Profile (2014), published by UN-Habitat, some squatters have been given a measure of security by having paid the annual ‘squatters’ rights fee’ (US$20 per annum) and some have invested in permanent houses. The UN-Habitat document was published four years before the Liberia Land Rights Law was finally passed in 2018.

But even the Land Rights Law, passed in 2018, appears quite vague or rather utterly oblivious to the rights of squatters. The law filters through a range of terminologies such as “License” (Chapter 17) and “Adverse Possession” (Article 58). The law defines a License as “a privilege to use [land] owned or possessed by another and may be created by an agreement expressed or implied.”

Adverse Possession, however, is more elaborate in its definition by law. It is “the acquisition of Title to private land by a person or his privy based on the person’s notorious, continuous and uninterrupted possession of said private land without any objections being interposed by the owner for the period established in Article 22 of this Act.” Article 22 says 15 or more years.

And while adverse possession is the closest thing to squatters’ rights by definition, the law is absolutely clear by saying that “the elements of Adverse Possession do not apply to Government Land or Public Land.”

Echoing his boss, Tepentry Young, LBS's Deputy for Technical Services and Operations argued that squatters took over the area because of its openness —  claiming that marketeers took advantage of this and started selling after LMA and the LBS agreed to allow them squat and pay a monthly fee that would be given to the LBS.

“Since 2014, LMA has not sent any money to LBS, and when the past administration tried to contact them, nothing happened. You know at that time, we had a female president, and every time LBS administration approached the LMA they would go to the President and she would ask for us to leave them,’’ Young claimed.

Meanwhile, LMA, when contacted, declined to comment, stating that the association will respond in due time to LBS.