Skip to main content
DY
Article by David A. Yates

The Minister of Education, Prof. D. Ansu Sonii, and the Minister of Youth and Sports, D. Zeogar Wilson, on June 24, toured all ongoing construction and renovation works of EU-funded TVET facilities under the Youth Rising Project including, the William V.S. Tubman High School in Monrovia, the Monrovia Vocational Training Center (MVTC) in Paynesville, and the Booker Washington Institute (BWI), TVET Center for professional Training, Research and Innovation (TCPTI) in Kakata, Margibi county.

Both ministers were also joined by the superintendent of the Monrovia Consolidated School System (MCSS). The tour was intended to ascertain the level of work being done at the various institutions. The projects, when completed, will demonstrate the government’s determination to prioritize TVET to deliver quality education and to prepare Liberians for future employment and job creation opportunities.

The day-long tour, which was led by staff of the United Nations Industrial Development Organization (UNIDO), including its Deputy Project Manager, Anthony A. Nimely, as the implementing agency, aimed at providing an update and showcasing the level of work that has been done so far at the various TVET centers or facilities. 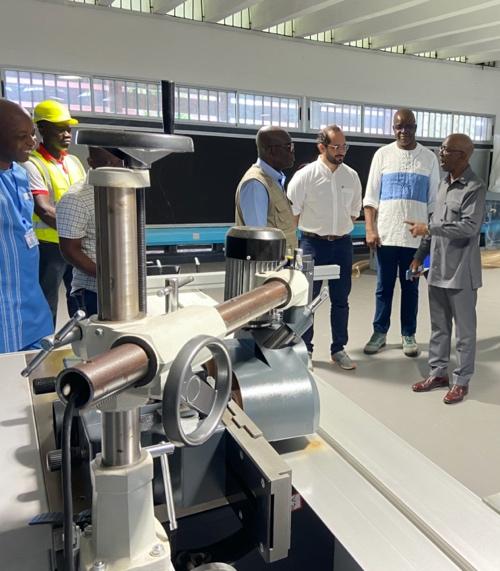 The tour was extended to BWI's campuses, where Atty. Harris Fomba Tarnue, the principal, was present along with other guests. These facilities now have modern, state-of-the-art training equipment that will be used to train TVET instructors and students in relevant and demand-driven technical skills, ranging from an electrical, auto mechanic, welding, carpentry, and information and communication technology (ICT), as well as machining/milling equipment.

In addition, a modern national TVET Center for Professional Training, Research, and Innovation (TCPTRI) has also been built at BWI by UNIDO with support from both the European Union and the Government of Sweden.

The TCPTRI is intended to serve as a major hub for training vocational teachers and trainers across the country. Prior to the tour, Nimely, who provided a brief overview of the project, said the Youth Rising Project is an initiative of the government of Liberia to make young people gain their rightful place in society by upgrading their skills so that they can acquire employment and contribute to the economy.

He said Tubman High is one of the seven institutions where the government is receiving funding from the European Union to support TVET schools.  While works on those facilities are still in progress, Nimely said they will move to another stage.

“We always make it our duty to come and showcase what is happening so that the young people in Liberia can see that there is hope and transformation for them,” he added. According to him, the project beneficiaries should be able to integrate into the labor market or create their own jobs as a result of the TVET program.

“Our welding instructors from South Africa are now in the country, and we are conducting further training at ArcelorMittal Liberia Training Academy with a focus on fabrication because this is something that our instructors never had the time to perform in South Africa,” he stated.

During the tour of the facilities, D. Zeogar Wilson, Youth, and Sports Minister made the assertion that technical and vocational education and training are vehicles for the nation's industrialization and will create respectable job prospects for the inhabitants. Wilson also used the opportunity to thank the European Union for continuing to support the government of Liberia's efforts to modernize technical and vocational education.

“I think we are carrying on the vision of the President when it comes to TVET. President Weah wants to see TVET institutions in all the 15 political subdivisions, thanks to the European Union. I think that goal will be achieved,” he said.

Wilson added that one of the key things the President wants to achieve as a leader is to make the young people of Liberia competitive in the labor market, and as such, the new types of equipment that are there just bear testimony that “the young people will be better prepared for the job market, especially handling these modern machines.”

Prof. D. Ansu Sonii, who also spoke, thanked the European Union for sponsoring TVET and asserted that TVET was crucial to Liberia's growth. Sonii, who described the equipment as “21st century electronically driven machines,” will urge students enrolled in those TVET institutions to learn and perfect their skills.

“These projects are aimed to perfect the young people to produce the kind of content that we as people can rely on the younger generation to produce to improve Liberia,” Prof. Sonii said in a call to parents to encourage their kids to come and learn.

Speaking about the facility at BWI, Tarnue, principal and chief executive officer, expressed gratitude to the European Union for its intervention in the TVET sector on behalf of the Liberian government.

“Let us all embrace TVET, which would sharpen our skills for entrepreneurship and the job creation agenda we need to move our country forward," he said.

He asserted that the European Union funding, which has now been complemented with funding from the Swedish government and other international partners, including the French government's decision to intervene in the TVET sector, the Liberian government, and BWI, are overwhelmed with the support needed to ensure that the nation’s TVET sector is competitive with any TVET training institutions worldwide.

According to him, the nation can rely on BWI, and young people can benefit from this cutting-edge technology.

“There is nothing we can do but make the greatest use of what we have because what we have now was not here before. This center, which champions TVET, is essentially the biggest TVET institution in Liberia,” Tarnue noted..