Editor’s Note: This story was originally published by The DayLight and is republished by the Daily Observer as part of a collaboration. James Harding Giahyue, with The DayLight

A logging company cut trees worth an estimated US$2.2 million outside its contract area in Lofa County, a huge violation in forestry that carries one of the industry’s heaviest penalties, an investigation by The DayLight has found.

Between 2018 and last year, Sing Africa Plantation Liberia Limited illegally harvested probably 5,693 logs or 32,576 cubic meters of woods in Bluyeama Community Forest in the Zorzor District on Lofa’s border with Gbarpolu, according to our calculations of official records of the company’s production during that period. The harvest took place in a portion of the forest not included in its contract with the community. The majority of the logs are ekki wood,  one of the most expensive tree species on the world market.

The illegal harvesting breaks the National Forestry Reform Law. The Forestry Development Authority (FDA) has admitted its approval of the harvesting was a breach of legal requirements.

“The problem was that we had a plan that was developed by our technicians—I must admit that did not go [through the legal process],” the FDA’s Managing Director C. Mike Doryen told The DayLight in an interview. “What the company did was to take advantage of the flaws we had in the plan and extended their operations in that area, which was not a good thing.”

Those flaws have taken a toll on the FDA, though.

In January earlier this year, four top-level managers were suspended after an inquiry by the Ministry of Justice found out the agency had granted several companies excess forests to harvest. They include Jerry Yonmah, the former technical manager of the commercial department, Simulu Kamara, Abraham Sheriff and Jesse Varney, the technical manager, director for operations and director for a database of the legality verification department (LVD), respectively. Their suspensions followed two reshuffles at the agency in November last year and January earlier this year. All four men resumed work after their suspension was lifted recently.

Doryen, who directly sanctioned Sing Africa’s illegal harvesting, blamed the situation on capacity and function issues within the FDA’s legality verification and commercial departments, which deal with contracts.

“That was the problem,” Doryen said. “It was obvious if the commercial man is not with these people, there is a likelihood that there are going to be some compliance issues. Now the government has started to help us. We have two staff to be assigned to a company.”

The news comes barely seven months after a report by a conglomerate of civil society organizations found that logging companies in Grand Bassa cut trees worth nearly US$2.5 million, reminiscent of the Private Use Permit scandal roughly a decade ago.

The DayLight summed up Sing Africa’s harvesting records for the four-year period and found the total volume of the logs from the illegal sub-sections of  forest known in forestry as “blocks.” Afterward, we grouped all the logs by tree species and multiplied each group of the species by the prevailing prices on the international market. Then we summed up the values of all species to get the total value of the illicit woods.

It could be more or less than US$2.2 million worth of logs. More because our calculations excluded the company’s 2019-2020 felling. Less in that, we were uncertain that few of the controversial blocks were actually outside Sing Africa’s contract area. That is the case due to the fact that the company’s approved operational plans include blocks covering the entire forest.

It was the leaders of the community forest that raised the alarm over the issue two years ago, which led the FDA to investigate the matter in January earlier this year. Findings of that investigation, seen by The DayLight, showed that locals had informed the FDA about the unlawful harvesting since 2020. It also revealed that Sing Africa had left some of the trees in the forest it illegally felled as early as 2017.

“The area they (Sing Africa) said they were not going to work, we saw them cutting blocks there. After that, they went there in 2021 and started cutting logs,” recalled Gayflorson Korballah, one of the community leaders who detected the illegal harvesting in an interview in a town called Balagwalazu. In normal forest practice, blocks, which measure 100 square kilometers, are determined by the size of the contract area and duration of the contract.

Sing Africa had rejected the portion of the forest at the center of the illegal harvesting because Ecowood, another company, had operated there before, according to Alexander Songu, the head of the community-forest leadership. Songu said the community tried to persuade Sing Africa to sign for the entire forest but failed. The parties sealed their deal in January 2016 for 44,444 hectares, leaving out 5,000 hectares of Bluyeama’s total forestland, the agreement shows. 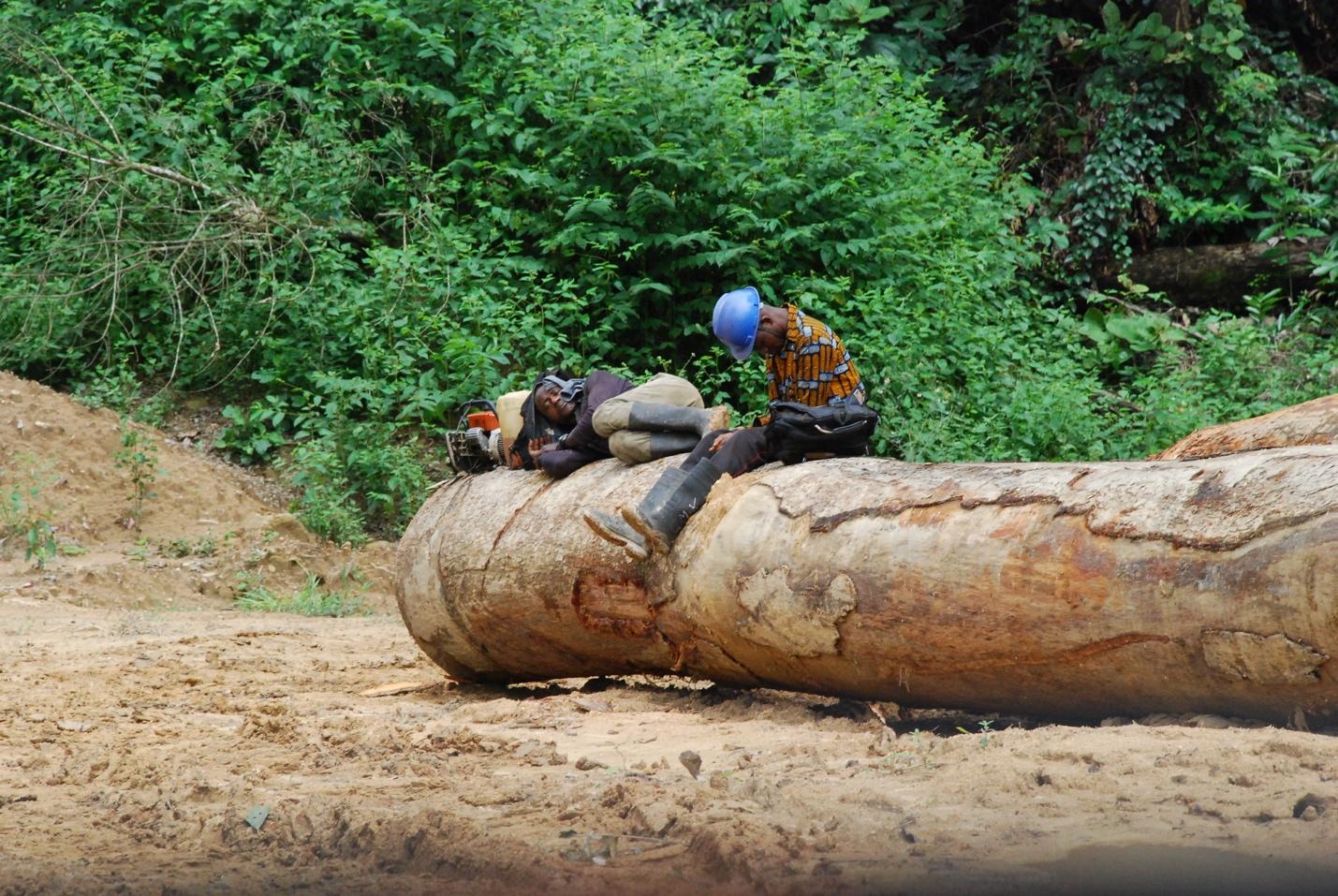 Two workers of Sing Africa take a nap on one of the logs the company likely illegally cut in September 2021. The DayLight/James Harding Giahyue

The DayLight saw ample evidence of the illegal harvesting, including a number of the stumps of the illegal logs with tracking barcodes. We traced some of the logs to a sawmill run by the company in that area and in its log yards on the Gbarnga-Lofa and Buchanan-River Cess highways. We even witnessed three trucks transporting some of them to Monrovia on the 12th of last month at 6:45 pm, beyond the legal time for the transport of woods. It was unclear whether the company obtained a permit for that transport, as the nightly movement of logs is almost completely prohibited.

Likely unlawful transport aside, the haulage of the logs is a violation of  Regulation 118-17 on Confiscated Log, Timber and Timber Products. That regulation provides that illegally harvested logs must be confiscated following a court order, which has not taken place near five months since the FDA launched its inquiry. In fact, the company is currently seeking a permit to export the logs it has transported to the Freeport of Monrovia, according to Moses Monorporlor, one of its managers.

In a separate interview, Atty. Gertrude Nyaley, the technical manager of the legality verification department of the FDA, said the agency would not grant Sing Africa an export permit for any illegal logs.  “We know how to trace each and every standing tree to the blocks from where they come,” said Nyaley, who led the department’s inquiry on the scandal.

The FDA is matching reports from its legality verification and commercial departments, and conducting a third investigation on the matter before finally taking any actions, according to Doryen.  “Eventually, we are going to take some actions. We are in a better position now to be faster,” he said, adding the agency now had two of its staff with each company and their salaries increased by US$125.

Sing Africa denies any wrongdoing. Mukesh Gupta, its CEO, insists his company has not broken any laws. He said they had been transparent in their operations.

“No, we are not logging outside of the concession,” said Gupta, three of whose relatives own the company,  in an interview with The DayLight. “We have cut those blocks, and FDA is aware of this,” he said, adding that the company’s agreement with the community covers all 49,444 hectares.

Apart from Sing Africa’s agreement with Bluyeama, other evidence does not support Gupta’s claims. Sing Africa has been paying the community US$30,555.25 for land rental fees against the portion of the forest provided in their agreement, not the entire forest, according to records of the payments. In Liberian forestry, a community’s land rental fee is 55 percent of the product of the total size of the contracted forestland and US$1.25, the rate for a hectare.

If convicted by a court, Sing Africa faces a fine twice the value of logs it illegitimately felled in Bluyeama, a six-month prison term, or both, according to Regulation 118-17. Under the regulation, it is an offense if a company cuts logs outside its permit area intentionally or negligently.

“If the investigation proves that I am wrong, FDA has all right to penalize me,” Gupta said. “If I am not wrong then there is no way they can penalize me.” 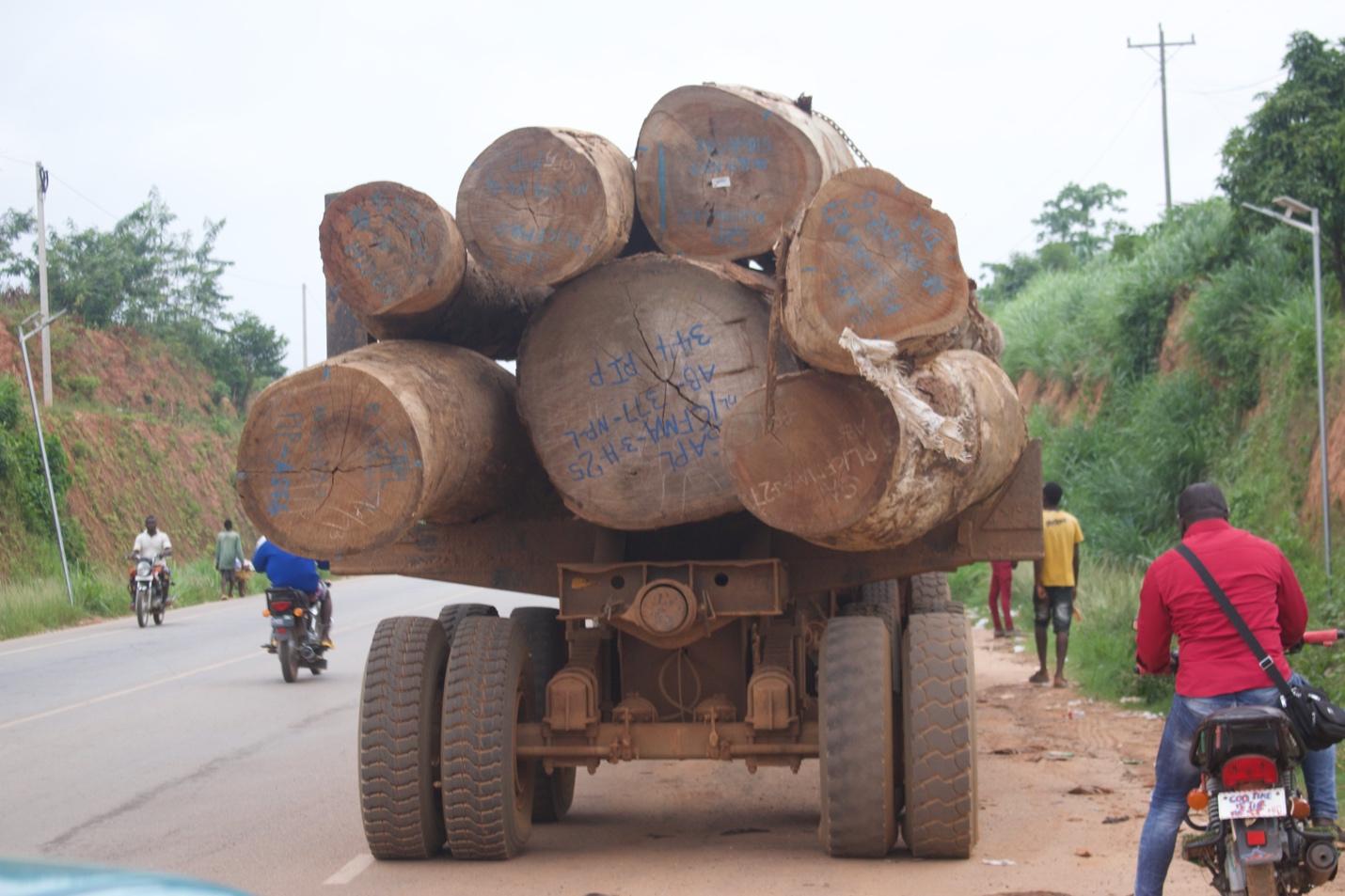 Sing Africa transports some of the logs it likely illegally harvested in the Bluyeama Community Forest. The DayLight/James Harding Giahyue

This story is the first of a three-part series on the illegalities of Sing Africa Plantation Liberia Limited, a Singaporean company logging in Zorzor, Lofa County.