Editor’s Note: This story was originally published by The DayLight and is being republished here as part of a collaboration with the Daily Observer. Varney Kamara, with The DayLight

An unlawful deal for a company to purchase a consignment of logs illegally felled and abandoned in a forest in Grand Cape Mount County has stalled after authorities found out the woods are collateral in a lawsuit.

In 2018, Alma Wood Corporation (Liberia) Limited felled the logs as part of a logging concession the forestry sector calls Timber Sales Contract Area 16 or TSC A16 in the Gola Konneh District. The company’s owners reportedly fled the country, leaving the logs there until the Forestry Development Authority (FDA) canceled the contract last year.

Sun Yeun, the original holder of the contract,  and the community forest development committee (CFDC) of that area, tried to sell the logs to East End Logging Company, owned by former Minister of Justice Benedict Sannoh, earlier this year. But the FDA disapproved the deal because Alma Wood had used the logs as a surety to obtain a US$643,000 loan from Afriland Bank.

The bank had sued Alma Wood after the period of the loan elapsed. El Zein Hassan, the company’s CEO had been arrested but was released on bail, with Sky Insurance Company filing his bond. Hassan would later flee the country and the court ruled that the insurer seize the logs, according to several individuals familiar with the case. (Our own efforts to obtain the court’s file on the case did not materialize. We will update the story with details from the document once we obtain it).

Afriland Bank and Sky Insurance declined to speak on the matter.

The forest where the logs were harvested has been marred by irregularities from the very beginning. Covering 5,000 hectares, TSCs are meant for companies that have at least 51 percent Liberian shareholdings. They were meant to empower Liberians following 14 years of civil war during which time local businesspeople were marginalized by foreign firms that supplied warring factions with arms. But TSC A16 was awarded to Sun Yeun, 98 percent of whose shares are held by a Chinese businessman named Wei Zhang, according to the company’s legal documents.

Also, the subcontract deal between Sun Yeun and Alma Wood was illegal as the latter company’s equity stakes are equally shared between Hassan, a Lebanese and a Radwan Wardwiche, a Senegalese tycoon, according to Alma Wood’s legal documents.

The contract also overstayed its legal timeframe of at most five years, remaining active for more than a decade having been issued in 2009. The board of directors of the FDA had illegally extended the contract alongside 10 others in 2017 but recalled that move in March last year. 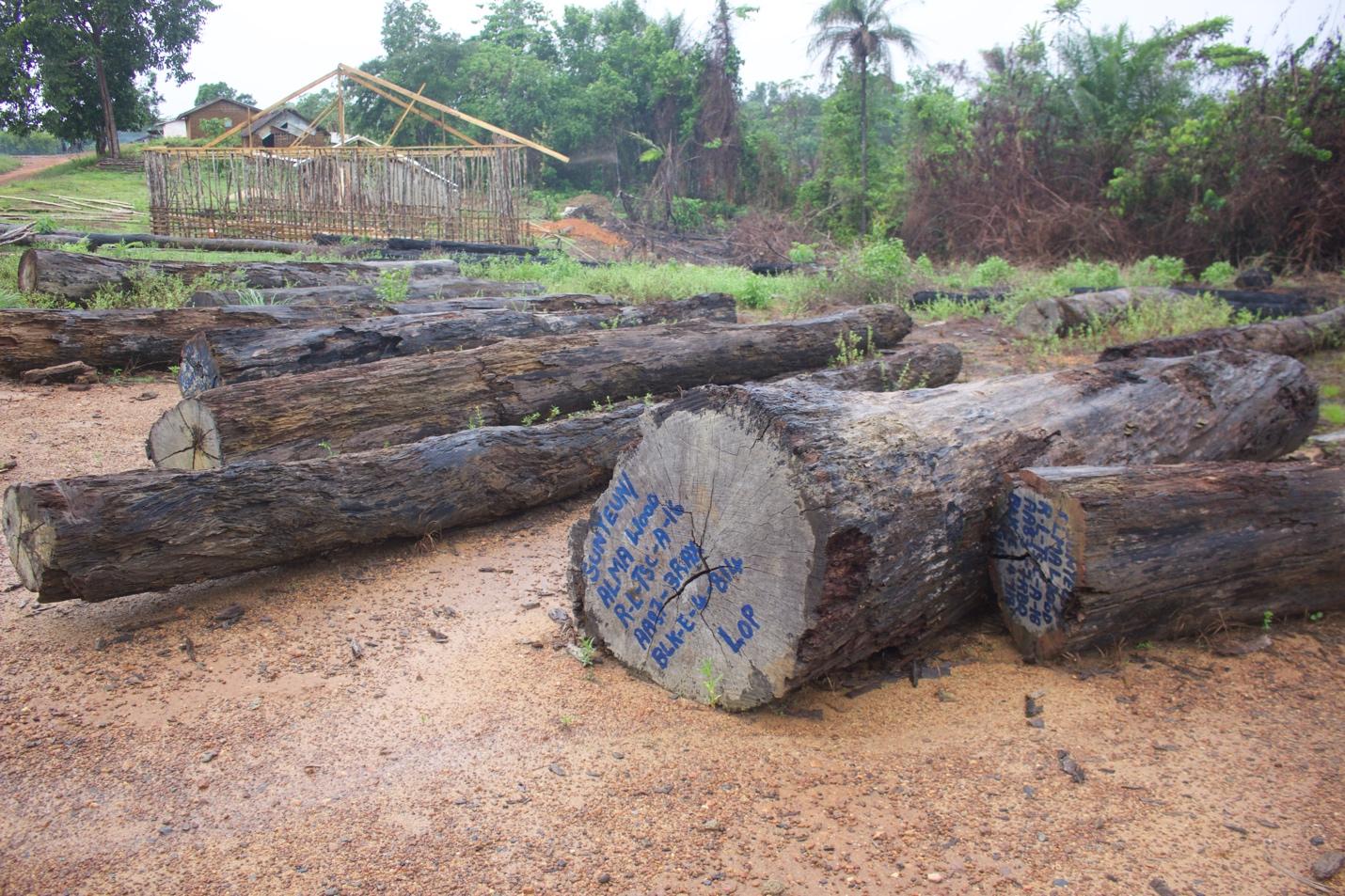 Some of the logs Sun Yeun harvested and abandoned in its log yard in Mafala, Grand Cape Mount County. The DayLight/James Harding Giahyue

Josephus Banks, Sun Yeun’s CEO and one of two of the company’s Liberian shareholders claims that the company is not majority Chinese-owned but has failed to show any proof. He also argued in an interview with The DayLight, that its subcontract deal with Alma Wood was not illegal.

Banks blames the abandonment of the logs on the FDA.

“FDA contributed to those logs being there today. When Alma Wood’s contract expired, I wrote the FDA informing it about logs being on the lining. FDA delayed and I wanted to sell at the time,” said Banks. Locals also said they informed the FDA about the logs in 2019, with Ruth Varney, its official responsible for the western region, confirming that to The DayLight in a mobile phone interview.

In April earlier this year, the FDA gave all logging companies operating in the country a month grace period to declare the trees they have felled, even though FDA should have companies’ production and export records.

“We should be headed for auction this month (June) [in the eastern region] and then the exercise will continue in the northern region and then go down south and western part,” said Mike Doryen, FDA’s Managing Director, in an interview with The DayLight.

“The court is going to make a determination, and that is what we will follow,” Doryen added in reference to the Alma Wood case.

It would have been another violation had the FDA approved East End’s purchase of the abandoned logs. The regulation on abandoned logs requires the FDA to transport the logs to a safe location and reenter them into the government tracking system known in forestry as the chain of custody (CoC). An auction only can take place after a court warrant if no one claims the woods following months of a mandatory, legal notice. If Sun Yeun wants to redeem the logs, it would have to do that within 14 working days of the FDA’s seizure, provide proof of ownership and pay an administrative fee for each of the logs.  Those requirements have yet to be met.

But the case between Alma Wood and Sky Insurance in Monrovia has dashed the hopes of locals, who had wanted the logs sold to get overdue benefits now that TSCs are no more. Sun Yeun owes the villagers here and a nearby concession (TSC A15) a combined US$190,900 for land-related fees, official records show. It also owes affected communities US$3,000 for scholarships and failed to build 10 latrines and one handpump, according to Jaycee Farr, the general secretary of the community forest development committee, which manages villagers’ logging-generated benefits.

“Of all the TSCs that were operating in this country, I was the most potent TSC holder. We (Sun Yeun) brought in more than US$5 million worth of equipment, brand new, not used,” he said, even though records of the company show otherwise. The US$190,874.50  his company owes the two communities is the second-highest debt for land rental fees —next to Bulgar and Vincent Timber Company—among former TSC holders, official documents show.

At an annual meeting of the Liberian government, the European Union and civil society in March, the FDA promised to work with the National Union of Community Forest Development Committee (NUCFDC) to address TSCs’ arrears, according to records of the event.

Doryen said the FDA was committed to that plan. “Yes, we didn’t do that (addressing benefits and other issues) but we will do it now,” Doryen added.

Editor’s Note: This story is part of a series on abandoned logs, which highlights the failure of the forestry sector to prevent the waste of much-needed forest resources across the country. Funding for the story was provided by the Liberia Media Center (LMC). The DayLight maintained complete editorial independence over its content.