-- Mobwie Joseph exclaimed with excitement when her eyes cleared up. “Oh! Mama, I can see clearly now,” the 2nd-grade student told her mother. Joseph seemed eager to learn but, due to the cataract infection, she could not continue. “I dropped from school for years. Every time I got to class, tears rolled down my cheeks.”

For over 5-years, James B. Marwolo could not support his family due to a cataract infection, an eye disease that is curable.

Having worked for five years as a nurse at one of the clinics around Kolahun, Lofa County, Marwolo, 66, said he became unable to discharge his duties as a nurse.  But a new day dawned for Marwolo and his son, Thomas Marwolo, 41, when the rural cataract surgical team entered Kolahun to treat them.  Following successful surgery, they expressed excitement and described the Samaritan’s Purse as a true representation of God.

“We are so happy to regain our sight,” the elder Marwolo said. “This is like a dream for me and my son. I am so grateful for this.”

Cataract is the leading cause of blindness in Liberia, and if nothing is done to clear the backlog, there will be more people going blind.  About 219 people, including the elderly, women, and children, are said to be on their way to total recovery, following the successful conduct of free cataract surgeries in Kolahun.  The five-day free cataract surgery series was conducted by the New Sight Eye Center (NSEC), in collaboration with the Ministry of Health (MOH), with support from Samaritan’s Purse (SP).

The exercise follows a pre-screening process of 1,447 patients from five rural communities including Foya, Kolahun, Massambolahun, Kamatahun, and Bolahun.  The mission, according to the surgical team headed by Dr. Joseph L. Kerkula, National Eye Program Manager at the Ministry of Health (MOH), started in 2019 with River Cess County.

The 5-day exercise is also part of the team’s third surgical outreach program in Lofa County. 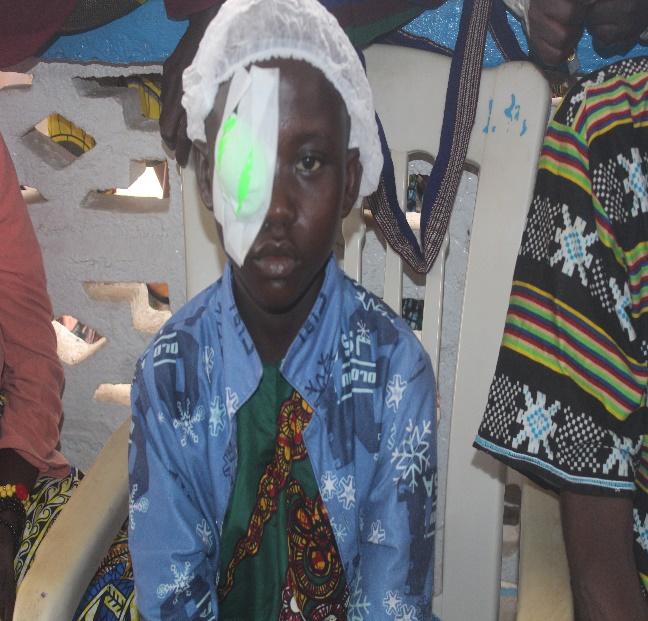 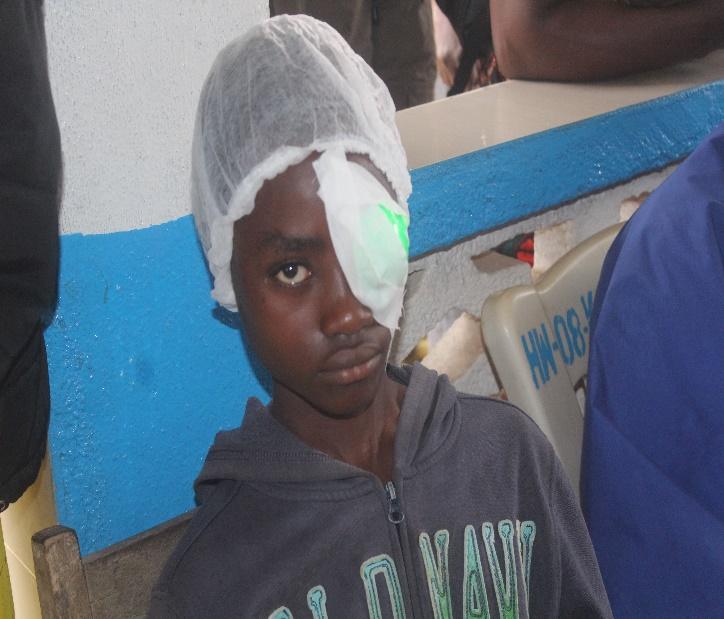 Two youngsters, Jeremiah A. Kollie and Mobwie Joseph, both 12 years old, were also among four kids who went under successful cataract surgery. Jeremiah is a 6th-grade student at Fasavolu Public School. For more than 2 years, he had an extremely difficult time in school as a result of the cataract infection.

“I couldn’t see clearly on the blackboard before,” he narrated. “At times, I used to appeal to my friends to write my notes for me. But today, thank God.”

Mobwie Joseph exclaimed with excitement when her eyes cleared up. “Oh! Mama, I can see clearly now,” the 2nd-grade student told her mother. Joseph seemed eager to learn but, due to the cataract infection, she could not continue. “I dropped from school for years. Every time I got to class, tears rolled down my cheeks.”

At the end of the 5-day surgery, Mr. Robert Dolo, CEO of the NSEC, said the mission has been very challenging, but they were grateful that the team is working towards achieving the goal.

“We started in 2019 with Samaritan's Purse being the sponsor for this program. We have visited almost every part of the country except Bomi County,” he stated.  "The team goes into rural communities to basically screen patients with problems and those that are blind from cataracts."

He, however, said the surgical outreach team is expected to take its next outreach to Bomi County soon.  During the free surgical outreach, patients were provided surgical care services, including health education, food and medication, and glasses, among other services.

Dolo further disclosed that on average, the team has been able to screen over ten thousand (10,000) people since the project started.  Those who were operated on were given a schedule for a follow-up to ensure that they got the necessary medical attention after their surgery.

He further said those who had complications with support from their partners, will be able to address their problems. Dolo also indicated that over the last four years, the team was able to operate with approximately two thousand people.

“We are glad that, with the support of our partners, we can do this for the people of Lofa.” Surgeons were also able to screen about three thousand people from those five rural communities in Lofa. We have been able to see people using traditional medicines (herbs). This has spoiled some of their eyes, so we provided health education to help them,” Dolo added.

Most of the cases they encountered during the surgical outreach in Lofa were cataracts and glaucoma. Glaucoma is a group of eye diseases that can cause vision loss and blindness by damaging a nerve in the back of the eye, called the optic.

Meanwhile, Kekulah said the presence of the cataract surgical outreach team in the rural communities in Lofa county means a lot, especially having such a service at the disposal of the people.

“The team was overwhelmed with the level of reception and turnout,” he said. “These people cannot leave here to go as far as Monrovia for surgery. Looking at the economy, challenging an eye clinic in Kolahun and other areas will be a major achievement."

Kekulah also stressed the importance of focusing on people who are visually impaired because they are more vulnerable in society.  According to him, it is critical to have an eye clinic in Lofa and that this exercise should serve as a wakeup call for policymakers (lawmakers) to support eye care services in Liberia.” 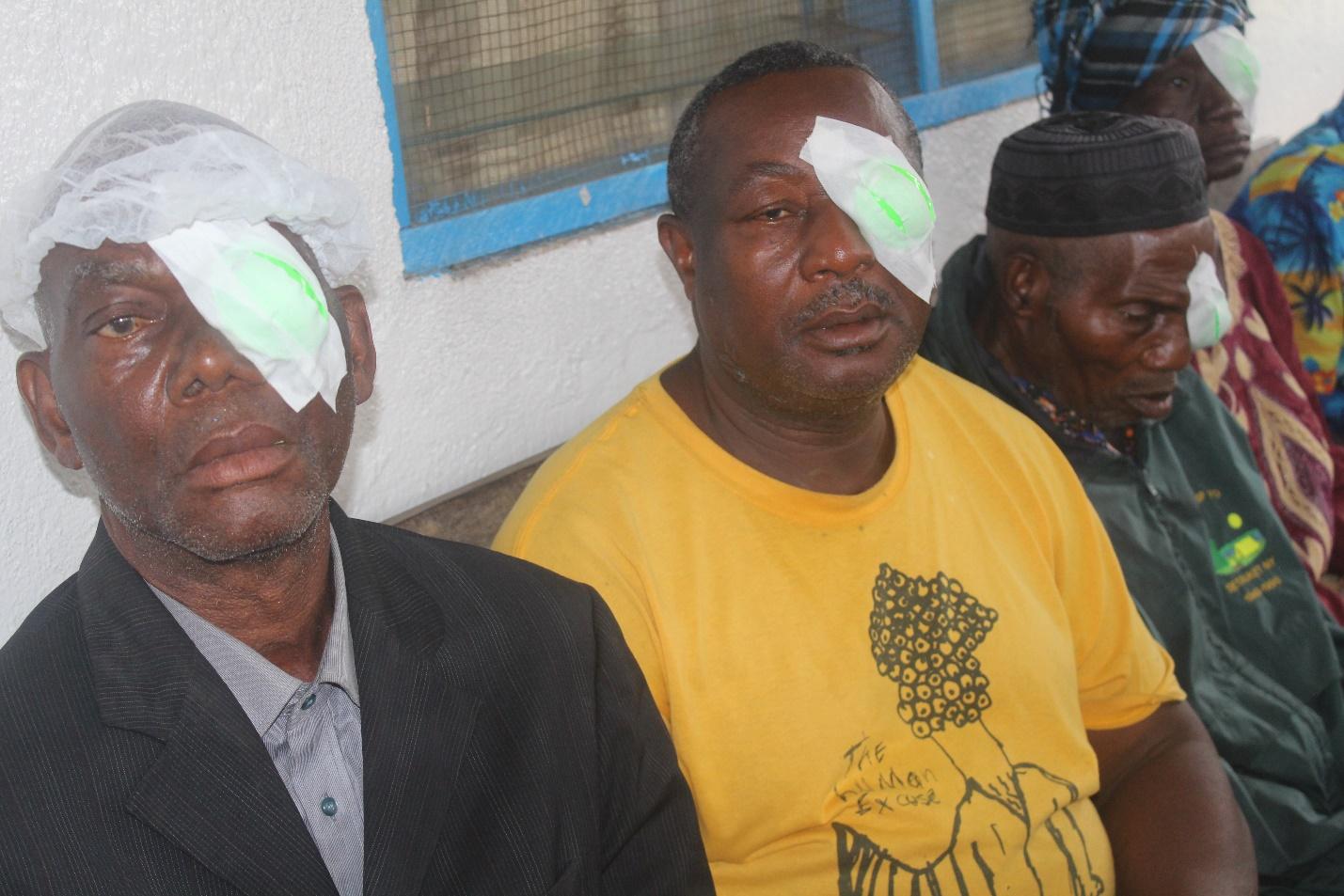