Edith Z. Duo 30, a professional nurse, worked at a clinic on Bushrod Island but had to abandon her job due to eye complications. “I have been in this for more than five months now. When I visited an eye center in Paynesville, I was diagnosed; the Doctor said I got pressure in my eyes. Thereafter, they prescribed some medications but, since then, things are yet to improve,” she said.

Helena Solo, a businesswoman, could not fully support her family due to a cataract infection, a curable eye disease. A cataract is the leading cause of blindness in Liberia, and if nothing is done to clear the backlog, there will be more people going blind.

As a mother of 4, Helena, 39, has been living with eye complications for seven years, “I visited the hospital two different times and the doctor gave me medicine that would stop it for a while; there is no improvement up to now,” she said. “As I speak, two of my Children are not in school because of my condition.” This situation has led her younger sister to take responsibility for two of her children.

Prior to the coming of the free eye screening conducted by the Ministry of Health (MoH) through the National Eye Health Program, with support from its partners in Monrovia and its environs, both Edith and Helena were not too sure of ever being able to see normally again.

The screening exercise brought together hundreds of residents, including the elderly, women, and children, from two separate locations — New Kru town and Siloam Eye Center in Congo Town.

Edith and Helena were among more than 400 people from the densely populated borough of New Kru town who benefited from the screening.

Edith said she was not too sure of finding a solution to her eye problem as the medical team’s exercise was meant for a day. However, she was given some medications and a referral to the Eye Clinic at the Redemption Hospital for further care.

Helena was happy for the team and hoped this would not be the last.

The activities by the team were in commemoration of World Sight Day, an annual event observed by Health authorities globally every second Thursday in October. It is also meant to raise awareness of eye health amongst individuals, families, and communities.

This year’s celebration is held under the Theme “Love your Eye”.  The team provided free medication, provision of glasses for people who needed it most, as well as some referrals to the John F. Kennedy Medical Center (JFKMC) for further attention.

Dr. Joseph Kekula, National Eye Health Program Manager, mentioned that the huge turnout was driven by the huge backlog of people who had different eye conditions and needed help because they didn't know where to go for a solution. “We think that this outreach was timely for the people.”

As part of efforts to intensify Eye Health care awareness across Liberia, he said, the Ministry including all healthcare providers thought it was important to reach out to people. “We reach out to speak for the voiceless, as well become voices for the voiceless through vigorous advocacy.”

Dr. Kerkula stressed the importance of service delivery to ensure that some interventions are made for those who cannot afford them.

Joyce Joe 14, was not born with any eye complications. According to her (Mother Joyce), “My daughter started experiencing this at the age of 11, I didn’t take it seriously till today that she finds it so difficult to see things from a little distance, even to read clearly.” 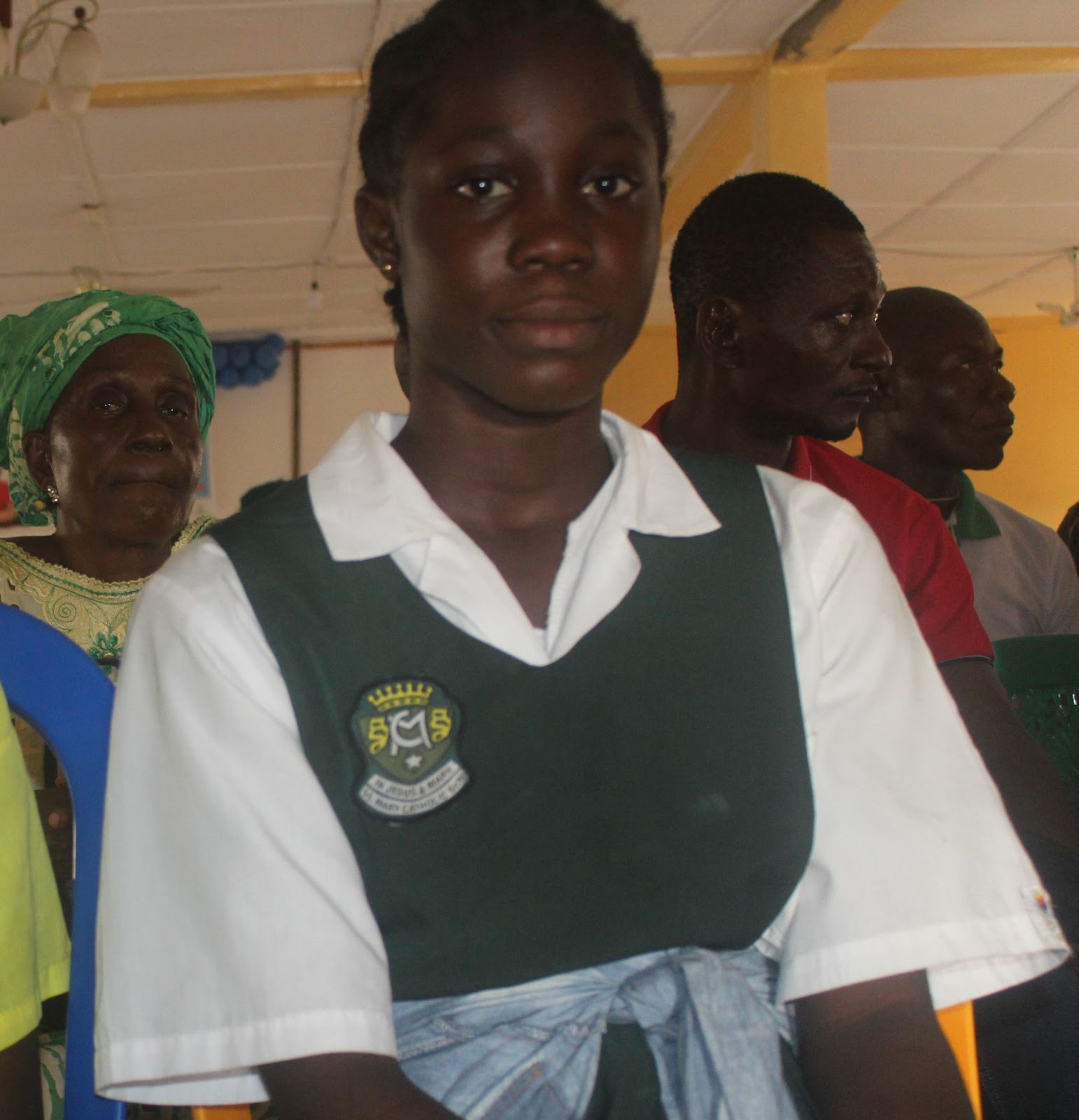 Little Joyce, is a Ninth (9) Grade student at the St. Mary’s Cholathic School

The one-day exercise in Congo Town targeted 150 persons, most of whom were women and children. However, due to the huge turnout, the screening process surpassed the team’s target.

Most of the cases they encountered during the outreach were cataracts and glaucoma. A glaucoma is a group of eye diseases that can cause vision loss and blindness by damaging a nerve in the back of the eye, called the optic.

Meanwhile, this exercise, according to Dr. Kerkula, has over the years been replicated in other parts of the country. It may be recalled that a few months ago, he called for special priority to be placed on eye clinics, an approach according to him remains one of the Ministry’s focuses.

Kerkula: “Presently we are working with partners in India through the Liberia Eye Center at JFKMC to ensure that some primary eye centers are established across the country. This is a measure to be able to stop the proliferation of Eye Units in the country.”

According to him, plans are also underway to establish (Six vision Center) in four countries. “Two persons have been selected from each of the counties to go to India for further training as vision technicians for the period of one year to be able to help the first vision centers in these counties.

However, research has shown that Eye Health impacts education, employment quality of Life, poverty and so many Sustainable Development Goals (SDGs). This World Sight Day organizations and the public come together to encourage governments, corporations, institutions, and individuals to actively call for universal access to eye health.

In another development, Alex Bedell, Country Director at Sightsavers said, “Eye health crisis in Liberia will spiral if we don’t act now.” In Liberia, the number of people in need of eye care is spiraling. There were an estimated 480,000 people with vision loss in 2020, of which 21,000 were blind. This is a global problem, not just a regional one, and it is estimated that without concerted action, the number of people who are blind across the world could triple by 2050."

According to Bedell, good eye health has a ripple effect on society, improving education, well-being, the economy, and health outcomes.

He disclosed that Sightsavers also hosted various activities to highlight the importance of eye health, including awareness-raising at selected slum communities in Bushrod Island. Eye health screenings and cataract surgery camps in Monrovia, Gbarnga, and Barclayville.

In a release, Country Director at Sightsavers said that "Eye health is often seen in a silo rather than as part of the wider health and development agenda. But eye health equals opportunity, allowing children to learn and adults to earn. It helps individuals, families, communities, and nations thrive.

"The growing eye health crisis is not inevitable; we can stop it if we come together to act now. We all need to increase the attention given to eye care and recognize how integral it is to every facet of life. By making it part of national and global development work and focusing on gender and disability inclusion, we will reduce inequality and help achieve the United Nations’ Sustainable Development Goals."Bedell added.

The importance of eye health can be seen through stories such as Princess from Maryland County, who had vision impairment due to cataracts caused by diabetic retinopathy. Her vision loss caused her to drop out of school, and she relied on her mother and brothers to help her get around.

Princess had cataract surgery through a Sightsavers project supported by Irish Aid and is happy to have her vision back: "I am happy that I have regained my sight, and I want to go back to school," she said.

In Liberia, Sightsavers is working with the government and other partners to identify and fill gaps in eye care, particularly in remote areas. Thanks to funding from Irish Aid and Dubai Care, this project is providing training for eye health workers, infrastructure and policy advice, expertise on eye health, and supporting eye healtprogramses in schools and hospitals across the country.

Sightsavers is also supporting the Ministry of Health to develop an eye health plan for the country. But there is still more to be done.

Bedell continues, "The United Nations’ Sustainable Development Goals mention leaving no one behind, but there are still many people in that position.  If we are to tackle the eye health burden in Liberia, continued cross-sector collaboration, well-resourced interventions, funding, and commitments are needed to integrate inclusive eye health into wider health, education, employment, and development systems.

Sightsavers' Eye Health Equals’ campaign and World Sight Day activities complement the wider International Agency for the Prevention of Blindness (IAPB) call on participants at the recent World Sight Day to ‘love your eyes’ and focus the world’s attention on the importance of eye care.