James Harding Giahyue, with The DayLight

In 2018, the Bondi Mandingo Authorized Community Forest signed a logging agreement with Indo Africa Plantation Limited. The community agreed for the company to log in its 37,222-hectare forest in the Bopolu District of Gbarpolu County in exchange for development.

Three years on, Indo Africa is yet to live up to the agreement, failing to pay the community land rental and harvesting fees.

“The community people engaged us so that we can engage Indo Africa so that they can meet up with their social responsibilities,” says Mark Dennis, the Chief Officer of Bondi Mandingo’s forest leadership, known across the forestry sector as community forest management body. “Indo Africa has failed, and that has brought pressure on us from the community people.”

Some 250 miles away in Zorzor District, Lofa County,  Bluyeama Authorized Community Forest faces a similar situation with Sing Africa Plantation Liberia, another logging company. The community agreed for the company to cut logs in its 44,444-hectare forest in exchange for schools, roads and clinics. More than six years later, Sing Africa has failed to live up to the contract.

“The promises you made to the people and you don’t do it makes the community feel different. They are seeing logging going on,” says Alexander Songu, chief officer of Bluyeama in an interview with The DayLight. “The communities are not satisfied and they regret why they gave up their forest to Sing Africa.”

Apart from their failing logging agreements, Bondi Mandingo and Bluyeama have one other thing in common: Both Sing Africa and Indo Africa are owned by a Singaporean family, the Guptas. The family also owns Starwood Incorporated, according to the articles of incorporation of the three firms. Starwood signed a contract with the Matro-Kpogblen Community Forest in Grand Bassa County of 8,833 hectares in 2018 in the District No.4 area. Indo Africa—which holds the concession in Bondi Mandingo—has another agreement with the 31,818-hectare Korninga B Community Forest in Bopolu District. It has also failed to come up with its side of the bargain.

The three companies have the same executives, too, with Kumah Gupta their chief executive officer and Moses Mononporlor, a former development superintendent for Gbarpolu, community forest manager.

In the four logging concessions the Guptas hold in Gbarpolu, Lofa and Bassa, covering 127,317 hectares, they made 50 promises to affected communities but implemented only 10 or 20 percent, according to our count. They did not fulfill any of the promises they made to Bondi Mandingo and Korninga B. All the commitment they kept and projects they implemented happened in Bluyeama and Matro-Kpogblen. For instance, they built the largest sawmill in the country in Bluyeama, have employed locals and paid US$27,484 towards a scholarship program for villagers, payment records show. They have also prioritized the employment of locals.

The Guptas also owe the four communities more than US$300,000 in land rental and log-harvesting fees. They owe Bondi Mandingo US$102,360 for all four years of the concession, the largest of the four community forests. They owe Korninga B US$64,593. They have yet to cut a single tree in the two Gbarpolu communities.  The family owes Bluyeama US$139,721 in land rental and log harvest fees, having paid US$103,610, records of their operations show. Sing Africa exported 52,265 cubic meters of logs in 2018 and 2019, according to the Liberia Extractive Industries Transparency Initiative (LEITI) in its 2018/2019 report. The Guptas’ debt with Matro-Kpogblen is US$26,000 in land rental fees. They are due to pay the community harvesting fees. For instance, they should have paid US$3,201 from the 1,940 cubic meters of logs they shipped in 2019, captured in the LEITI report.

The Forestry Development Authority’s (FDA) approval of Sing Africa and Starwood to export logs, despite owing Bluyeama and Matro-Kpogblen, is a violation of the National Forestry Reform Law of 2006. The law says, “The Authority shall not issue an export permit without confirming that all taxes and fees relating to the forest products subject to the permit have been paid.” In fact, under the law, the FDA can fine or terminate indebted companies’ contracts because of failure to pay its arrears.

Jonathan Yiah, the lead forestry campaigner at the Sustainable Development Institute (SDI), says authorities should compel companies to comply with all aspects of the law. “The sad reality is that the FDA and the national government have failed to uphold the law and have not learned their lesson,” Yiah says in reference to a 2005 Forest Concession Review report, which as part of Liberia’s overhaul of its forestry sector, found the country lost over US$64 million dollars to unpaid arrears. “There is need that the FDA, the Liberia Revenue Authority (LRA) and logging companies agree on an enforceable payment plan for the current arrears.” The government of Liberia generated more than US$1.7 million from the three companies in the 2017/18 and 2018/19 fiscal years, according to figures published by the LEITI.

The FDA did not respond to The DayLight’s request for an interview on the matter as well as export details of Indo Africa, Sing Africa and Starwood, relative to the four community forests. We sent an email to Mike Doryen, the managing director of the entity and hand-delivered a letter with the same contents but nothing materialized. FDA should make biannual publications of all fees companies pay, as provided under the National Forestry Reform Law and its regulation. The Freedom of Information Act of 2010 also mandates all government contracts and concessions are published. But that is not the case. Its website lists community forest agreements but those documents are not downloadable. We received some of the documents from its community forestry department through email.

It is not a violation for companies owned by the same shareholders to hold multiple logging concessions in Liberia. However, it is a breach of the Community Rights Law—which created community forestry—for rural towns and villages not to benefit from forest resources. It dents the community-centered reform of the sector, exploited by factions during the Liberian Civil War and scarred by decades of mismanagement. The Guptas’ rich 2B Ramsgate Road community in the southeastern Asian country is a sharp contrast to the poor communities they log in, neglected for decades by successive governments, compounded by the failed logging concessions.

Campaigners urge the FDA to conduct due diligence and use its oversight powers to stop companies from signing new deals when they did not perform well with previous ones.

“We strongly believe that the FDA must conduct a much stronger due diligence that will ensure that the company is credible and has the capacity to operate a particular concession,” Yiah tells The DayLight in an interview.

“This… highlights companies’ widespread failure to pay communities their dues. Liberia’s government must control logging companies’ activities and ensure that they all act legally and abide by the contracts they signed with communities, which few presently do,” says Saskia Ozinga, founder of forests and rights non-governmental organization, Fern, and now its adviser. Communities must have a forestry management agreement or CFMA with the FDA to be able to sign a logging agreement with a third party. 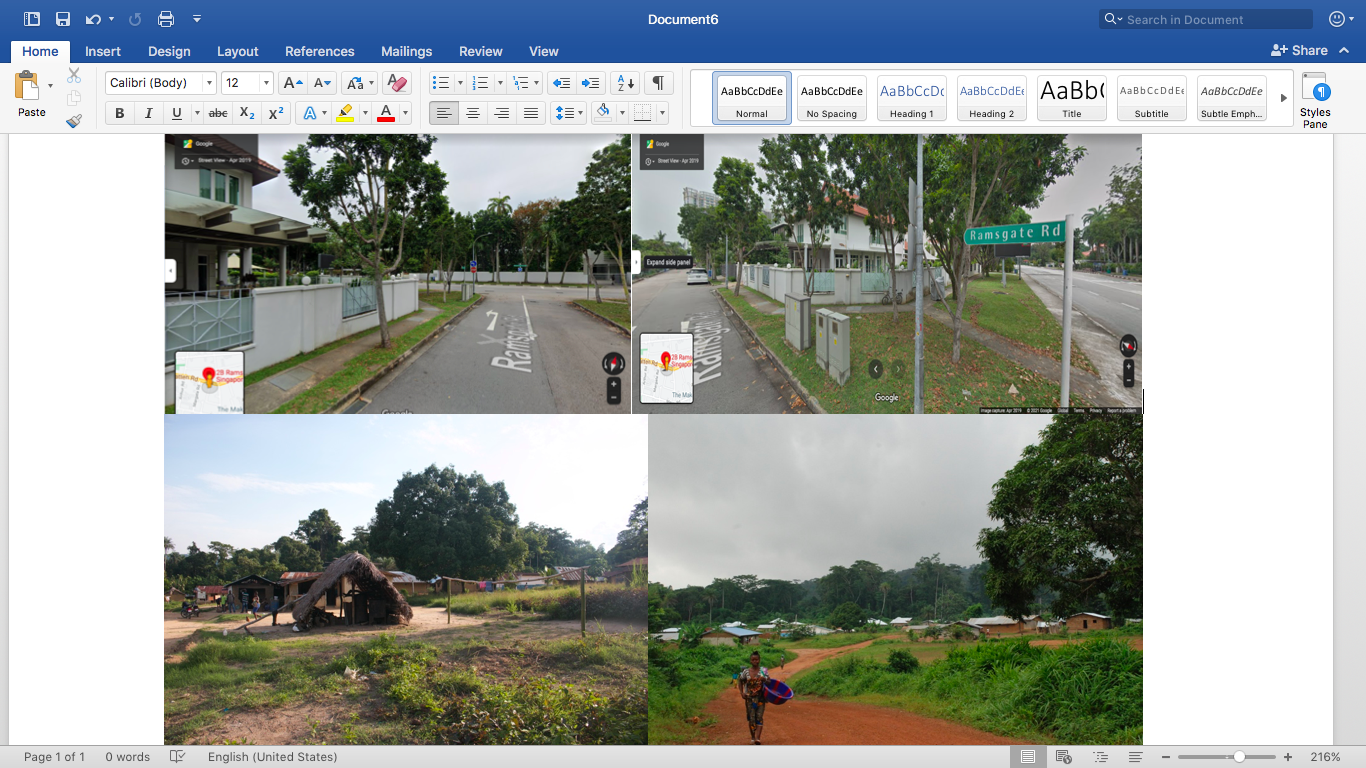 Sharp contrast: photo combination shows Google-sourced pictures of Ramsgate Road, where the Guptas live in Singapore, compared to Gbarquoita, a community in Bondi Mandingo in Gbarpolu and Bluyeama in Lofa, affected by Indo Africa and Sing Africa concessions

“Considering logging’s importance in [community forestry management agreements], it’s critical that timber logged under these agreements is incorporated in the legality grid, which is part of the Voluntary Partnership Agreement (VPA) Liberia signed with the European Union,” adds Ozinga.  Liberia and the EU signed the VPA in 2009 to ensure that Liberia produces and exports legal timber through strong forest governance and law enforcement.

The communities themselves are taking action over the Guptas’ indebtedness to them, including cancelation of their contracts with the family’s logging firms.

Korninga B wrote the FDA about their decision to cancel their contract with Indo Africa almost one year ago. “We do not want to work with Indo Africa Plantation Inc. since they have grossly violated and failed to meet up with any social [responsibilities] in the community,” reads the October 26 letter. “The agreement has already expired.” Legally, communities can terminate their agreements with loggers through the court system even without the consent of the government.

Bondi Mandingo held a meeting in December last year, resolving to begin the process to terminate their contract with Indo Africa beginning February earlier this year. It did not go as planned but they are currently working out modalities for the lawsuit.

Mukesh Gupta, the chairman of Indo Africa’s board of directors and its majority shareholder, at the start of this year blamed the company’s neglect of the forest on the presence of miners in the same forest.

Mononporlor had said in December last year Bondi Mandingo and Korninga B could press forward with their arbitrations if Indo Africa did not pay the outstanding amount by February this year. Two months after that deadline, the coronavirus pandemic broke out in Liberia after taking a toll on the global timber industry, halting production and stagnating export. Companies were unable to meet up with their social responsibilities with communities, according to the LEITI.

Like Bondi Mandingo and Korninga B, Matro-Kpogblen has reached an agreement to discontinue their relationship with Starwood and in May informed the FDA about their decision.  “Having realized the failure of the third-party holder to live up to agreement signed with the community, the community assembly, the executive committee, have agreed to cancel the agreement and terminate all relations with the third-party holder with immediate effect,” reads their resolution. The assembly is the highest decision-making body in community forestry, and the executive committee takes decisions for the body.

Kumah Gupta did not respond to The DayLight’s queries for comments on the current situation of the four companies. We reminded him throughout last week via WhatsApp and texts but got no response. Mononporlor later told us Gupta was sick and could not speak at the moment.

Of the four community forests, Bluyeama’s agreement with Sing Africa shows signs of hope. Both parties have reached a consensus to upgrade their current, six-page contract to a comprehensive agreement, which details things like exact timeframes for payments of fees and implementation of projects. They should have sealed the deal last month but the FDA halted the process until the Bluyeama’s community assembly can make a quorum. The body is expected to reach a resolution on the new agreement this week, according to Songu.  If it is signed, it would be the first enforcement of a commercial use contract (CUC) with the support of government, private sector, community and civil society. The CUC, voluminous with much details and clarity, is being heralded to help prevent payment-related conflicts in community forestry.

“This is different from the past, because it is the first time the people of Bluyeama are having the opportunity to make demands and make changes in the community forest contract with Sing Africa,” Songu, chairman of the Bluyeama forest governance structure told The DayLight at the end of an event for the revision of the document in August in Balagwalazu. “We are confident of this contract because I see the parties speaking here with honesty and commitment to the process.”

“It’s true that we have defaulted in the past but we are very hopeful of delivering to the community,” Kumah Gupta said at the event.

Gertrude Nyaley, the technical manager of the FDA’s community forestry department, supports Korninga B, Matro-Kpogblen and Bondi Mandingo for their impending lawsuits. “We encourage companies to meet up with their responsibilities to both the government and the communities because the essence of the community forest is to empower our people,” says Nyaley, a lawyer herself. “The outbreak of COVID-19 might have brought an additional challenge but the companies have to reach out to the people and they must have a meeting of the minds.”

William Harmon and Varney Kamara contributed to this article. It was originally published on October 21, 2021.