“At the same time, you are cultural envoys of Liberia. You are expected to make a due contribution to enhancing the China-Liberia friendship and win-win cooperation. I am convinced that this experience will be an enjoyable and unforgettable memory in your life," China’s Ambassador to Liberia, Ren Yisheng said.

The Chinese government through its embassy near Monrovia has disclosed that it will provide 190 full scholarships to Liberian elite scholars, many of whom are expected to leave for China soon. The disclosure was made by China’s Ambassador to Liberia, Ren Yisheng, at a pre-departure ceremony held at the Embassy near Monrovia.

“I’m pleased to inform you that, for the 2020–2023 period, the Chinese government will provide a total of 190 full scholarships to Liberian elites, many of whom are leaving for China soon.”

The Chinese Diplomat also disclosed that the embassy provides the Ambassador’s scholarships to more than 100 students of excellence from the University of Liberia, Tubman University, and Cuttington University every year, which has helped the fostering of talents in Liberia.

Ren added that China and Liberia are good friends and good brothers. “The Chinese people and relevant universities warmly welcome Liberian students to China for study and stay. I hope that the students will make the best use of the opportunity to study in China.”

He also encouraged recipients of the scholarship to work hard on their Chinese language skills and professional knowledge, gain an in-depth understanding of Chinese culture, and experience the historic development and achievements China has made over the years.

“May you all return home well trained to serve the country and the people and become the builders of Liberia’s development,” he said. “At the same time, you are cultural envoys of Liberia. You are expected to make a due contribution to enhancing the China-Liberia friendship and win-win cooperation. I am convinced that this experience will be an enjoyable and unforgettable memory in your life."

He added that people-to-people exchanges are an important means of deepening the understanding and friendship between our two peoples. The Chinese Diplomat recounted that in recent years, the Chinese government has on average provided about 50 full scholarships, which include master’s and doctorate degrees, to the Liberian government every year.

Amb. Ren noted that Liberian students and trainees who graduated from the Chinese government scholarships and training programs are playing increasingly important roles in their home country.

However, independent research conducted by this paper suggests that over the last one and a half decades, the Chinese government has provided the highest number of scholarships for Liberian students. For example, China gives over 40 scholarships every year through both the Chinese Scholarship Council (CSC) and the Ministry of Commerce of China (MOFCOM).

Ren indicated that under the framework of the Belt & Road Initiative (BRI) advocated by President Xi Jinping and the Pro-Poor Agenda for Prosperity and Development (PAPD) advocated by President George Manneh Weah, China-Liberia cooperation has achieved fruitful results in such areas as economy and trade, health care, infrastructure construction, food security, and human resource development.

He named the China-aided projects such as the Ministerial Complex, the two annexes to the Capitol Building, and the Roberts International Airport which, through concessional loans, have become new landmarks of Monrovia. Projects also include technical assistance for the SKD Sports Complex and Liberia Broadcasting System (LBS).

He added new projects like the two overpass bridges on Tubman Boulevard, the National Clinical Diagnostic and Treatment Lab at 14 Military Hospital, the Fingerprint Comparison Lab, and LBS upgrade and expansion are in the tendering and procurement phases.

At the same time, Ren disclosed that a Chinese engineering team is expected to arrive in Liberia soon to conduct a feasibility study for the Japan Freeway-Sinkor Road and Bridge project. He said the two governments are working closely on implementing a new phase of economic and technical cooperation.

The 20th National Congress of the Communist Party of China (CPC) will be convened on October 16 in Beijing. At this congress, the new leadership of the CPC central committee will be elected to lead the Chinese people to march towards the second centennial goal and build China into a great modern socialist country that is prosperous, democratic, culturally advanced, harmonious, and beautiful by the middle of this century when we celebrate the 100th anniversary of the founding of the PRC.

Liberia’s Education Minister, D. Ansu Soni, thanked the government and people of China for their continuous support for the growth and development of the country, including the building of the human capacity of many Liberian scholars. Sonii further stressed that the Liberian government and its people expect that the return of those students who have merited scholarships will impact society positively.

UL President, Dr. Julius Sarwolo Nelson Jr., said China has made a tremendous contribution, especially in the educational sector of Liberia, something he said can not be overemphasized.   Nelson also said the People’s Republic of China has been one of the most important contributors to Liberia, and one such contribution is the establishment of the Confucius Institute (CI) at the University of Liberia (UL), which was formally launched in 2008. He also mentioned the awarding of scholarships to students to study in China, from which the University of Liberia has immensely benefited over the years. 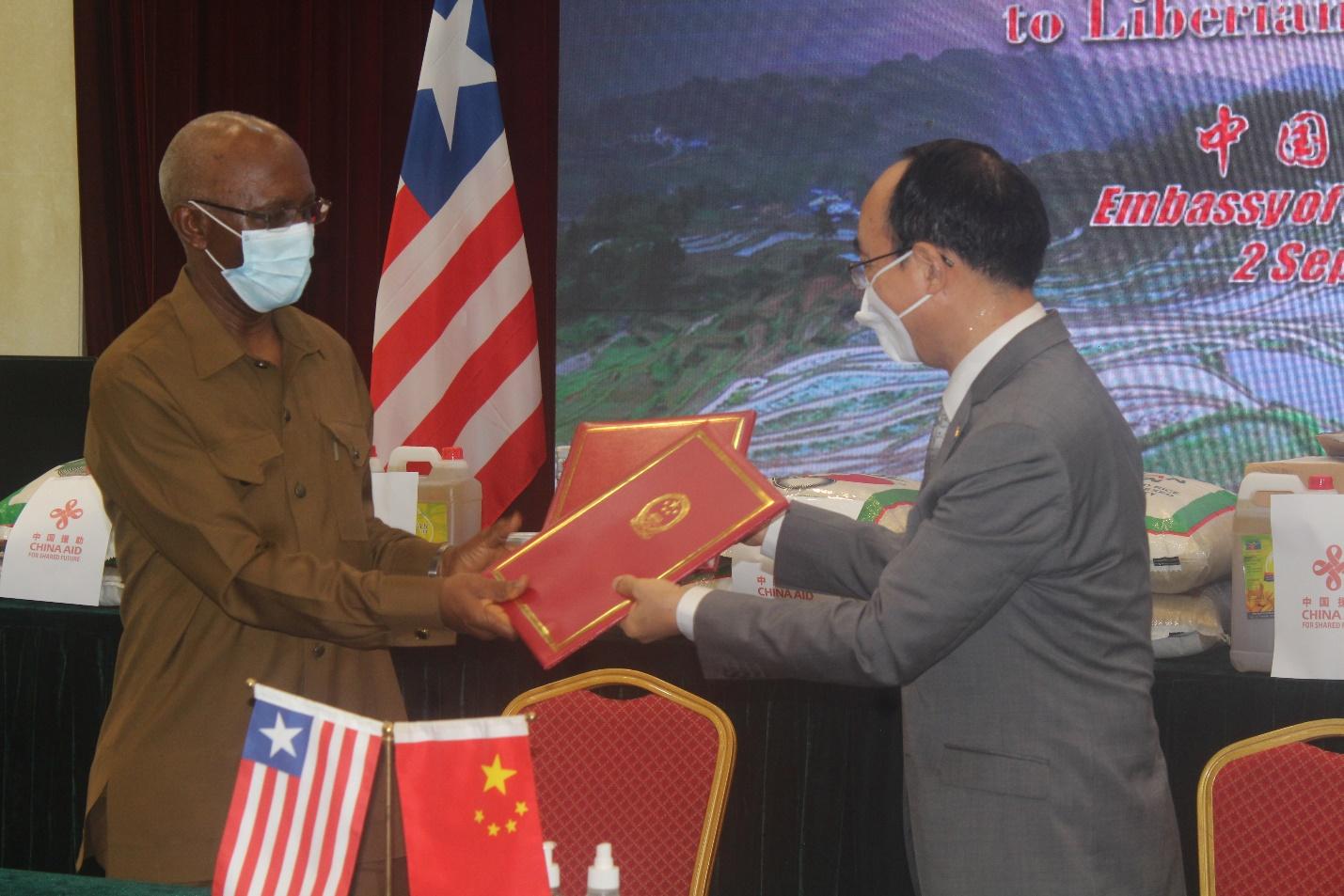 Education Minister Sonii and Ambassador Ren had a symbolic exchange of documents following the ceremony at the Chinese Embassy near Monrovia.